The three main indices all experienced gains yesterday after the announcement that China and the U.S. were calling a truce in the battle of trade tariffs. Due to industrial companies seeing some of the biggest benefits from the truce, the Dow led the way on Monday with a gain of 1.21%. The S&P gained 0.74% and the Nasdaq lagged the other two, but still managed a gain of 0.54%.

All ten sectors gained ground yesterday and as I mentioned earlier the industrial sector benefited from the news more than the others and the sector gained 1.53%.

The healthcare sector was the worst performer, but in the end it still gained 0.13%.

My scans continued to produce more bearish results and that was a little surprising given the big up day.

The barometer remains in negative territory with a reading of -14.1.

Goodyear Tire & Rubber (Nasdaq: GT) appeared on the bearish list last night and it is my choice for a trade idea today. The company hasn’t been the best fundamental performer in recent years. Goodyear saw EPS drop by 32% in the most recent quarter and sales have been shrinking at a rate of 5% per year over the last three years. 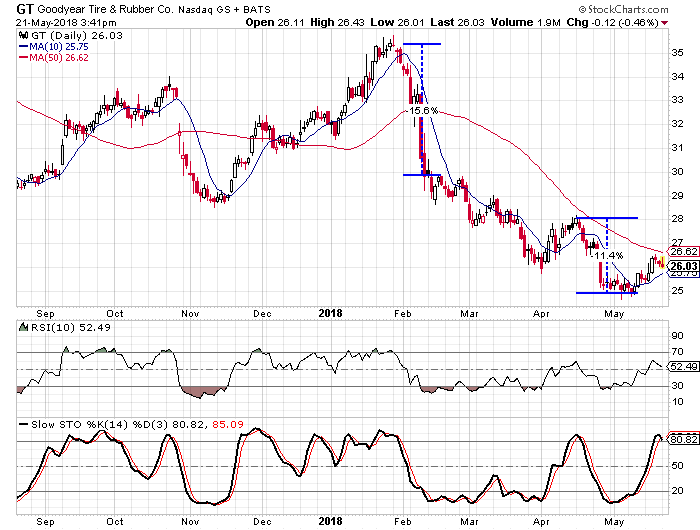 We see on the daily chart how Goodyear has been trending lower throughout most of this year. Since dropping below its 50-day moving average in February, the stock has not been able to move back above the trendline since. I look for that to remain the case for the next few months.

Buy to open the July18 $27-strike puts on GT at $1.50 or better. These options expire on July 20. The last two instances where the stochastics were in overbought territory and made a bearish crossover, the stock dropped over 12% from the high to the low each time. In the case of these options, we only need it to drop 10% for these options to double. I would suggest a target gain of 100% and a stop if the stock closes above its 50-day moving average.