The three main indices were split to some degree on Friday. The Nasdaq experienced the worst performance with a loss of 0.38%. The S&P lost 0.26% as the other index that was in negative territory. The Dow managed a small gain of 1.11 points, not a percentage gain. It was kind of strange as the S&P and Nasdaq were both in negative territory for the entire day while the Dow was positive for most of the day.

The sectors were mixed with four moving higher and six moving lower. On the plus side, the industrial sector led the way with a gain of 0.59%. That gain contributed to the Dow moving slightly higher as Boeing and Caterpillar both had solid gains on Friday. On the down side, the financial sector was the worst performer with a loss of 0.82%.

My scans remained bearishly skewed on Friday night with 39 bearish signals and 21 bullish signals. This is the ninth straight night that the bearish list has been larger than the bullish list. The barometer came in at -29.9 and that is the sixth straight night it has been in negative territory.

Despite the negative readings from the barometer, the chart that stood out the most to me was from the bullish list and the stock was Cognizant Technology Solutions (Nasdaq: CTSH). Cognizant is on a select list of stocks with an EPS rating over 80 and an SMR rating of an A. In this case the EPS rating is 87. 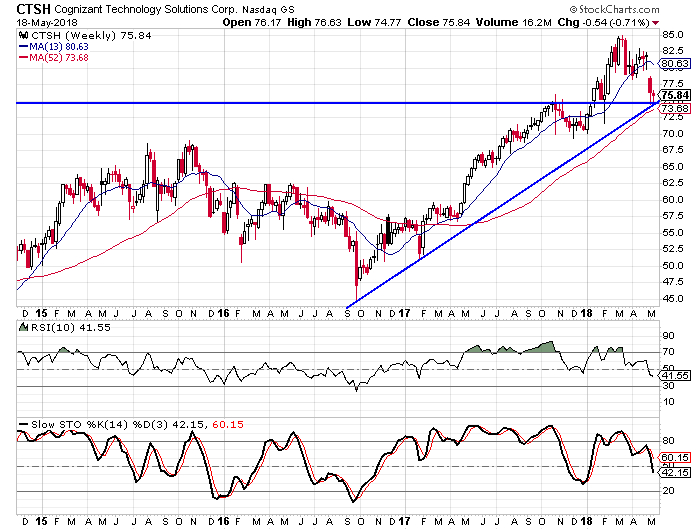 It was the daily chart that caused Cognizant to appear on the bullish list, but I thought the weekly chart painted a better picture of what has been happening with the stock over the last year and a half. We see that a trendline connects the lows and the stock just hit that trendline. There is the added support of the 52-week moving average and we see that the $75 area was resistance back in the fall. This gives the stock three levels of support to use for a bounce.