[hana-code-insert name=’adsense-article’ /]It is worth noting that he Russell 2000 closed down by 0.4% on the day.

The sector results were a little surprising as six were lower and only four moved higher Monday.

The biggest gainer for day was the energy sector with a gain of o.69%.

On the down side, the worst performer was the telecom sector with a loss of 0.44%.

This caused the barometer to drop to -32.8 and that is the lowest reading since April 24.

One name on the bearish list that got my attention was Autodesk, Inc. (Nasdaq: ADSK).

After climbing nicely for several years, the stock has experienced several big moves in both directions over the last six months. One of the things that got my attention was the relatively poor fundamental performance of the company. The stock gets a 40 rating in IBD’s EPS rating and an E in the SMR rating system. 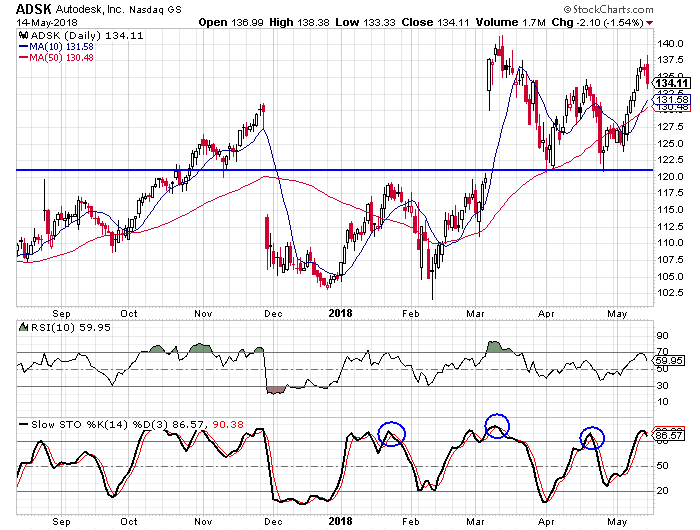 The stochastic readings made a bearish crossover yesterday and the last three times it did that from an overbought state, the stock dropped pretty sharply. We also see that the stock had a bearish engulfing pattern from yesterday’s trading action. I see the stock dropping back down to the $121 level in the coming months.

Buy to open the July18 135-strike puts on ADSK at $8.00 or better. These options expire on July 20. With the price of the options and the support at $121, that would give option buyers a gain of 75% and I would suggest that as a target. I would close the trade down if the stock moves back above the $138.50 level.