Friday’s trading action saw a mix in the performances of the indices. The S&P and Dow both finished higher while the Nasdaq finished lower. The intraday moves were interesting as the S&P opened higher and then moved down during the middle of the day, dipping in to negative territory a few times.

The Nasdaq was in negative territory all day and only made it to positive territory in the morning. At the end of the day the Dow was up 0.37% and the S&P was up 0.17%. The Nasdaq closed 0.03% lower.

[hana-code-insert name=’adsense-article’ /]The sector results were mixed as well.

Six of the sectors moved higher, one was unchanged and three were negative.

On the plus side, the healthcare sector was far and away the top performer, gaining 1.49%.

This was the result of President Trump’s speech on drug prices.

On the down side, the tech sector lost 0.14% as the worst performing group.

The consumer staples sector was the one that was unchanged.

My scans produced more bearish signals for a fourth consecutive night. The final tally was 36 bearish signals and 26 bullish signals. The barometer dipped back in to negative territory when these results were added with the final reading being -5.2.

Allegheny Technologies (NYSE: ATI) appeared on the bearish list and the chart caught my eye. The fundamentals are somewhat mixed with a good EPS rating of 77, but the SMR rating from IBD is a D. The specialty steelmaker has seen sales shrink in the last three years and it has a low profit margin and return on equity. 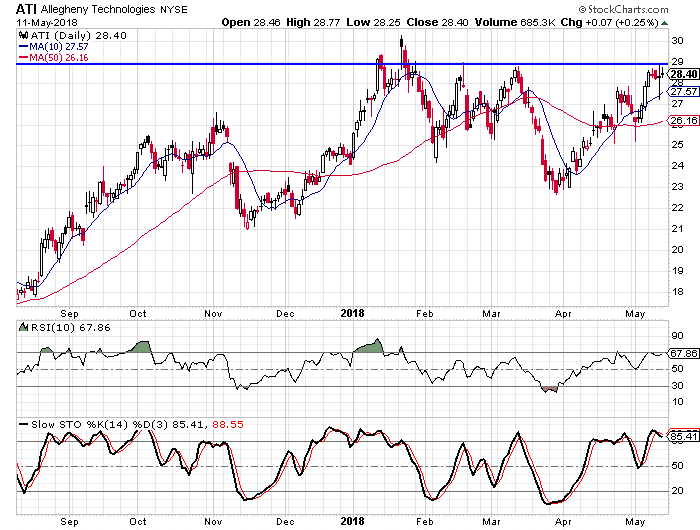 The stock has attempted to move above the $29 level on two prior occasions in the last few months, but hasn’t been able to get back above that point since January. I look for the stock to move back down below the $25 area in the next few months.