Stocks were vacillating back and forth on Wednesday until 2:00. Once the Fed made its announcement to keep rates where they are, the markets became far more volatile. Initially stocks moved up, but that didn’t last and stocks turned decidedly lower and closed near the lows of the day.

Nine of the ten sectors moved lower on the day with energy being the lone gainer with a 0.41% move to the upside.

On the down side, the consumer staples sector was the worst performer with a loss of 1.98%.

My scans were relatively balanced last night with 25 stocks on the bullish list and 23 on the bearish list.

The barometer did move back in to negative territory after these numbers were added in, but the reading was only -0.3.

One stock on the bullish list was also one I had targeted to purchase in May and that is United Rentals (NYSE: URI). The company receives a 97 rating from IBD’s EPS rating and an “A” rating in the SMR category. 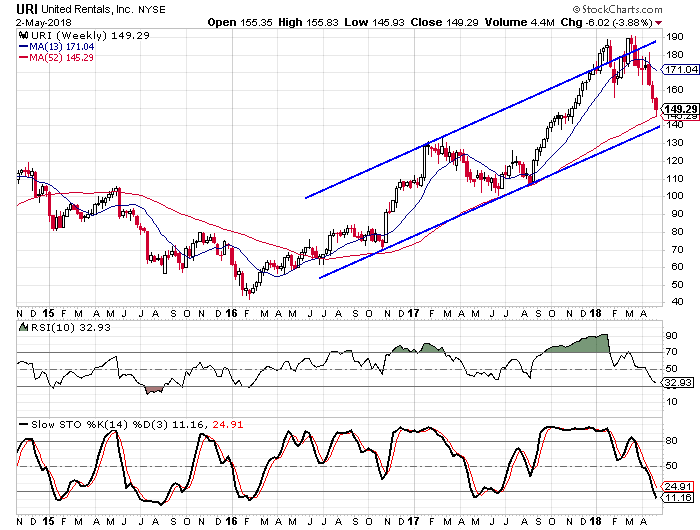 The stock has formed a trend channel that goes back almost two years and the lower rail is just below the 52-week moving average. We see that the stock hit its 52-week earlier this week and then bounced off of the trendline. I look for the moving average to act as strong support and will help vault the stock higher.

Buy to open the Jun18 150-strike calls on URI at $6.80 or better. These options expire on June 15. This trade idea is a little more aggressive than usual in that that the options are out of the money. You will want to adjust your allocation accordingly due to the aggressive nature of the trade. Based on the price of the options, the stock will need to rally 9.6% for the options to double, but I don’t think that will be a problem.