Tuesday was somewhat of an odd day as the performances from the indices were mixed and they varied greatly throughout the day. The S&P gapped lower and then moved lower throughout the morning before rallying and move in to positive territory at the end of the day (+0.25%).

The Dow was down over 350 points at the lows of the day, but pared its losses and only lost 0.27% at the end of the day. The Nasdaq didn’t see near as steep of a loss as the other two in the morning and it moved in to positive territory in the early afternoon.

The sectors were interesting as well.

As I was checking their performances throughout the day, the only sector that was in positive territory for most of the day was the tech sector and it ended up leading the way with a gain of 1.25%.

By the end of the day there were two other sectors that managed to reach positive figures, consumer discretionary and financials.

That still left seven of the ten losing ground with the worst performer being the telecom sector with a loss of 0.88%.

My cans produced more bearish signals than bullish signals for a second straight night with 35 names on the bearish list and 25 on the bullish list. The barometer dropped to a reading of 4.9 after these results were added in.

One name on the bullish list was Atlassian (Nasdaq: TEAM). The company reported earnings on April 19 and promptly sold off. Earnings grew by 24% and sales grew by 40% in the quarter, but the stock was downgraded after earnings and the company’s forward guidance was slightly below analysts’ estimates. But the stock ranks extremely well with a 95 EPS rating from IBD and an “A” in the SMR category. 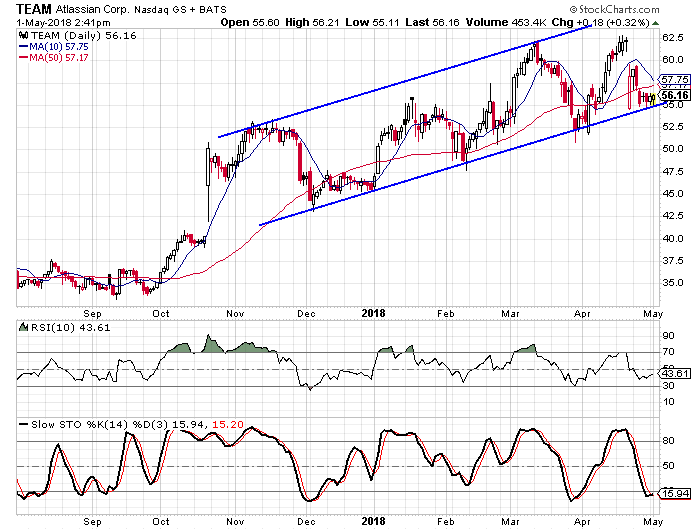 TEAM has formed a trend channel over the past six months and the stock is sitting just above the lower rail currently. I look for the stock to bounce back sharply and should head back up to the upper rail in the next six to eight weeks.

Buy to open the Jun18 55-strike calls on TEAM at $3.50 or better. These options expire on June 15. The stock will need to get to $62 for the options to double, but that doesn’t even bring the old high in to play nor does it have to get to the upper rail of the channel for this option to double.