Monday was a grinding kind of day for stocks. The indices opened higher and stayed there until early afternoon. Around 2:00, all three of the main indices dipped in to negative territory. The S&P recovered just enough to finish in the green, but not by much (+0.01%). The Dow lost 0.06% and the Nasdaq was down 0.25%.

With such a grinding day, you would be correct if you guess the sectors were split with their performances. Four sectors moved higher on the day while six moved down.

[hana-code-insert name=’adsense-article’ /]The energy sector had the best day with a gain of 0.59% while telecom had the worst day with a loss of 1.16%.

My scans weren’t nearly as lopsided last night as they were on Thursday and Friday night.

There were 11 bullish signals and 28 bearish signals.

Once these numbers were added in to the equation, the barometer did rise to -68.5 from -89.6, but is still decidedly negative.

It wasn’t on either the bullish list or the bearish list last night, but Exxon Mobil (NYSE: XOM) caught my eye last night as it is hovering right at a critical support/resistance level.

Oil has rallied sharply over the last couple of weeks and that has set up the trade idea for today. 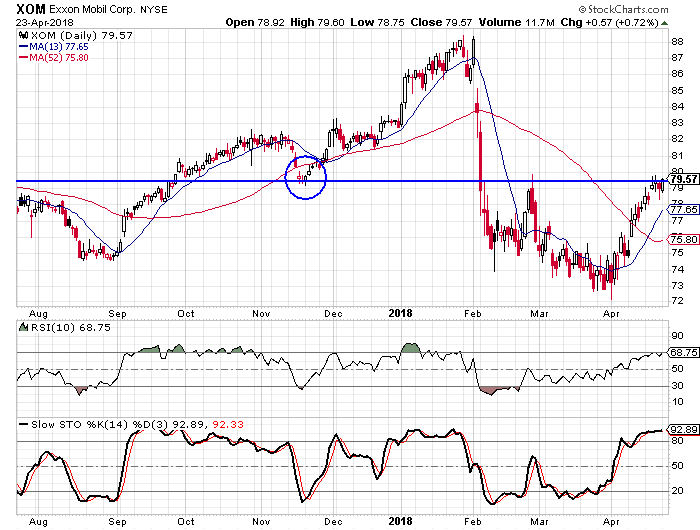 We see that the $79.50 area has been the site of support back in November and then it was recently the site of resistance back in February. The momentum is to upside for energy names, but many of them are overbought. This created a dilemma for me, but I think the solution is to play a straddle. I think there is a big move coming for XOM, but am not certain which direction the move is going to be. It is also worth noting that the company will announce earnings on Friday and that could provide the move to one side or the other.

Buy to open the June Week1 79 strike straddle on XOM at $3.85 or better. These options expire on June 1. The asking price on the calls is $1.98 and the asking price on the puts is $1.86, for  combined price of $3.84.Using a target gain of 50% for this straddle, and assuming there is no value from one side or the other, the stock will need to move to $84.76 on the up side or $73.24 on the down side. With the way the volatility has increased on oil in recent months, those targets seem very attainable.