We saw pretty solid gains across the board yesterday with all three of the major indices notching significant positive days. The Dow led the way with a gain of 0.87% while the Nasdaq was the laggard of the three and yet still managed a gain of 0.7%. It was interesting to see how the market seemingly shrugged off the news of the action in Syria.

[hana-code-insert name=’adsense-article’ /]Nine of the ten main sectors moved higher on Monday with telecom being the lone sector that declined.

On the plus side, there were three sectors that gained over one percent and they were utilities, materials and consumer staples.

The utilities sector gained 1.37% to lead the way.

The scans were somewhat balanced last night with 13 bullish signals and 31 bearish signals.

The biggest thing that stood out from last night’s scans was that each side had a theme to it. On the bullish side, seven of the 13 signals came from the utilities sector. On the bearish list, 17 of the 31 had something to do with the energy sector.

With those themes in mind, I have a bearish trade idea for you today and it is on the VanEck Vectors Oil Services ETF (NYSE: OIH). With so many of the signals coming from one sector, I felt an energy play was in order, but I also felt it was the oil services sector that looked like the weakest sub-sector with the energy sector. 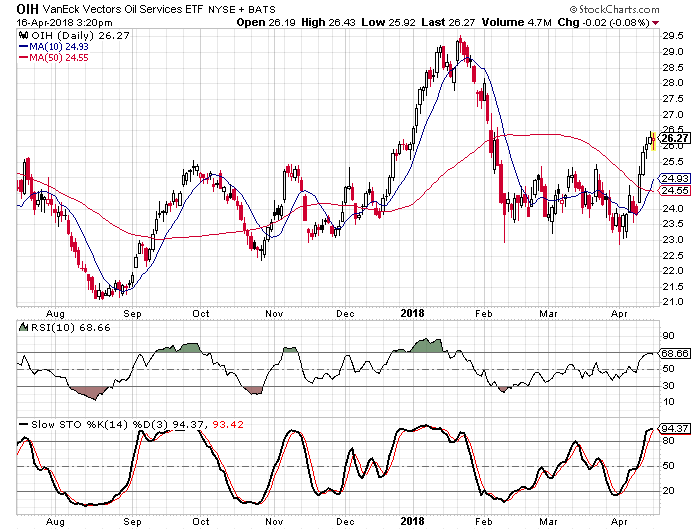 The chart shows how the OIH has rallied since the beginning of the month and the RSI and stochastics are at or near overbought levels. What struck me about the chart was the similarity to the shape of the top that occurred last fall to the one that I think we are seeing now. We see how the fund moved higher over a short period and then sorted rounded off at the top. After jumping sharply last week, seeing a down day for the OIH got my attention.

Buy to open the June18 28-strike puts on OIH at $2.30 or better. These options expire on June 15. I am looking for the ETF to return back down to the $25 level in the next few months and that would make these options worth $5 and that would mean a gain of 117% for investors.