We saw some selling pressure on Friday with all three of the main indices closing lower on the day, but all three closed higher on the week. It will be interesting to see how the market trades after the joint mission in Syria between the U.S., England and France.

[hana-code-insert name=’adsense-article’ /]The geopolitical tensions could escalate in the coming days and it could have an impact on financial markets.

Earnings season kicked off on Friday and it got started with earnings from three of the four biggest banks in the United States.

I bring this up because the financial sector was the biggest loser on Friday with a decline of 1.51%.

In all, seven of the ten sectors fell on Friday, but the financial sector was by far the worst performer.

The energy sector led the way with a gain of 1.1% while consumer staples and utilities were the other two sectors in the green.

My scans had a slight skew to the bearish side on Friday with 20 bearish signals and six bullish signals. Even with the bearish skew on Friday, the barometer remained in positive territory for now with a reading of 8.8.

One stock on the bearish list that got my attention was Ally Financial (NYSE: ALLY). Ally has modest fundamental readings with an EPS rating of 70 and an SMR rating of a “C” in IBD. The three banks that reported on Friday (Bank of America, Citi, and JPMorgan) all had better ratings than Ally and they all three fell on Friday despite beating earnings estimates. Ally is scheduled to report on April 26. 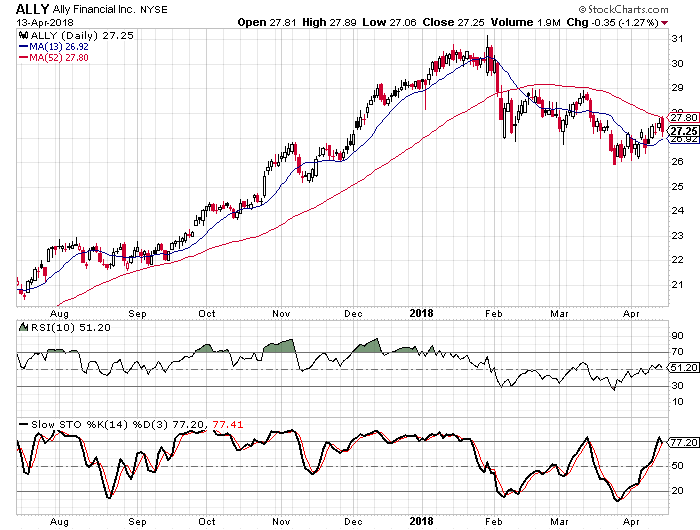 Buy to open the June18 28-strike puts on ALLY at $1.70 or better. These options expire on June 15. The stock will need to drop to $24.60 for these options to double, but I think that is a reasonable expectation. The two previous declines after testing the 50-day sent the stock down below $27 and then below $26, so it seems this one would send the stock below the $25 level based on the pattern.