The market was a train wreck yesterday. Futures were lower early this morning due to a little bit of a hangover from yesterday’s Fed statement and then President Trump through some fuel to the fire with his proposed tariffs on Chinese goods.

[hana-code-insert name=’adsense-article’ /]By the end of the day we were looking at steep losses across the three main indices, but the losses were even worse for Chinese ETFs.

All of the other sectors lost at least 2% and industrials and financials lost over 3%.

The scans were slightly skewed toward the bearish side last night with 18 bearish signals and eight bullish ones.

The barometer is barely in positive territory with a reading of 1.5. One stock jumped out at me when I looked at the charts and the fundamentals and that was Hertz Global Holdings (NYSE: HTZ). In all honesty it was the fundamentals that caught my eye and it was how bad they were that got my attention. HTZ ranks in the bottom 13% of all companies in terms of its earnings growth and it gets an “E” on IBD’s SMR rating. 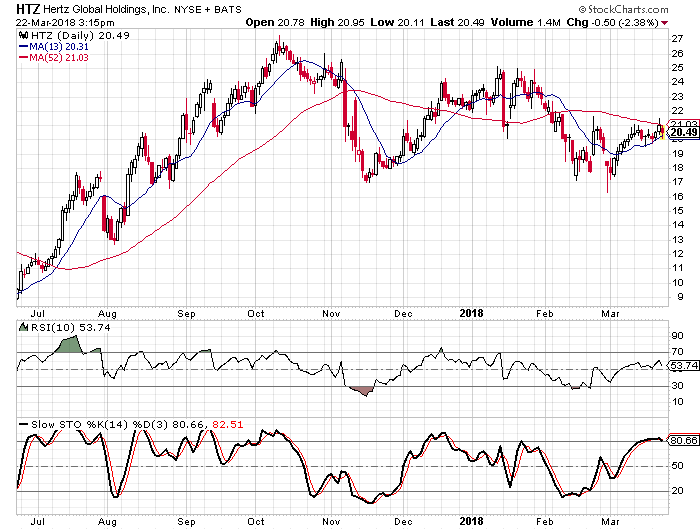 HTZ is trending downward after peaking in October. We see an lower high in January and now the stock is having trouble moving back above its 50-day moving average. We also see that the stochastics just performed a bearish crossover after hovering above the 80 level for several days.

Buy to open the May18 21 strike puts on HTZ at $2.40 or better. These options expire on May18. I look for the stock to make a run at the recent low down around $16.30 again. If the stock drops down there, these options are worth $4.70 intrinsically and these options would be just shy of doubling.