As is the case on most days when the Fed announces a rate decision, the market was considerably more volatile yesterday than it was the day before. After opening lower, the indices reversed and moved higher in to Fed announcement and moved even higher after the hike was announced.

[hana-code-insert name=’adsense-article’ /]Shortly after the announcement, selling commenced and all three main indices finished in the red for the day.

I’m not sure why traders had such a knee-jerk reaction; probability charts had the chance of a rate hike at 97% ahead of the meeting, so it was very highly expected.

Even after the reaction, my scans produced 36 bullish signals to only 24 bearish signals.

The barometer moved a little higher once I added this data.

Given that we have had so many bearish trade ideas of late and with the barometer being positive, I have a bullish trade idea for you again today. Activision Blizzard (Nasdaq: ATVI) caught my eye for its fundamentals as well as its chart. And, as recently as last Friday, the sentiment toward ATVI was in the bottom 10% of readings for the past year. 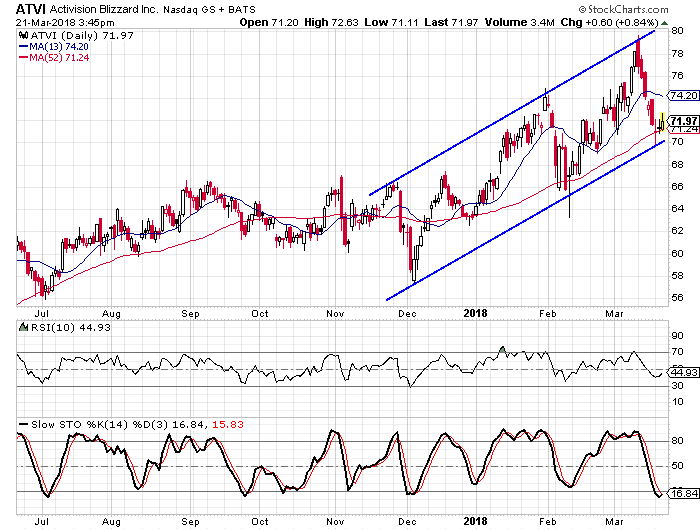 ATVI has been in an upward-sloped trend channel for the past few months and I look for the momentum to continue to the upside. The stock just hit the lower rail of the channel and looks poised to bounce. The last time we saw it this oversold and got a bullish crossover from the stochastics, the stock jumped $10. I am looking for a similar move this time.