The market experienced a big reversal yesterday after the minutes from the most recent Fed meeting were released. The S&P moved higher on the open and moved to its high of the day around 2:30.

[hana-code-insert name=’adsense-article’ /]The Fed minutes were released at 2:00 and stocks turned lower just after that.

The S&P ended up moving down by just over a half percent and closed at the lows of the day.

The reversal allowed the trend of having more bearish signals than bullish signals to continue.

There were 61 bearish signals compared to only two bullish signals.

One of the bearish signals was on communications firm CenturyLink (NYSE: CTL). CTL has been trending lower for almost two years now and the stock seemed to hit resistance at its 52-week moving average last week. 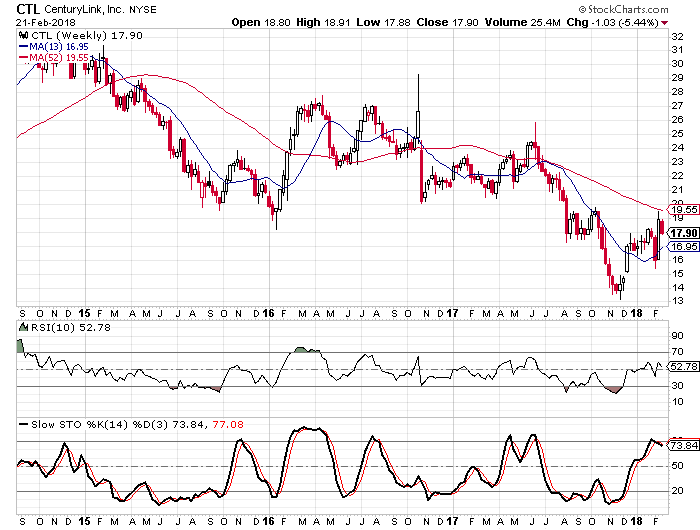 While the daily oscillators are what generated the bearish signals, the trend that appeared on the weekly chart showed the bearish picture better. Yesterday created a bearish crossover from the daily stochastic readings, but we also see that the weekly stochastic readings are making a bearish crossover at this time. The sentiment toward CTL hit its fifth highest reading of the past year last week and that is indicative of extreme optimism. When you see a stock in a downward trend with extreme bullish sentiment, it is usually a great setup for a bearish play.

Buy to open the April18 19 strike puts on CTL at $2.20 or better. These options expire on April 20. Given the downtrend and the extreme optimism, I look for CTL to move back down to the $14 area in the coming weeks. This would make these options worth approximately $5.00 and would create a gain of approximately 125%. The spread between the bid and the ask on this option is a little wider than I like, so you might try to buy the options just under the ask price.