[hana-code-insert name=’adsense-article’ /]The designer and manufacturer of products and systems employed in the construction and maintenance of overhead and underground networks for the energy, telecommunication, cable operators and information industries, Preformed Line Products Company (NASDAQ: PLPC), seems poised for a price surge according to its latest charts.

#1 Support at Fibonacci Level: The daily chart of PLPC shows that the stock had been on an uptrend from June 2017 and formed a top in November 2017. Since then, the stock has been correcting. It is now near the 38.2% Fibonacci retracement level of this move from $44.80 to $85.60. Usually, after an up-move, stocks retrace to any of the key Fibonacci levels before surging back again. So, this 38.2% retracement level seems like a good support area. 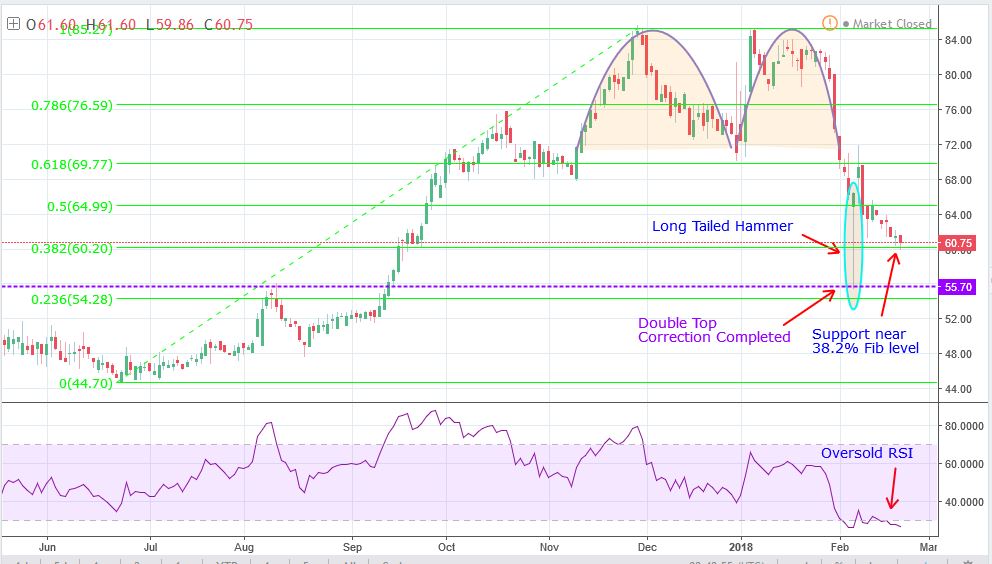 #2 Oversold RSI in Daily: The daily chart of PLPC shows that RSI is oversold. This shows that the selling momentum is weakening and the trend reversal might be around the corner. This is yet another bullish sign.

#3 Completed Double Top Correction: A double top pattern is a strong bearish reversal pattern. This pattern was formed between November 11, 2017, and February 2, 2018. Then the stock had broken down from the pattern and reached its target price by forming a long-tailed hammer on February 16, 2018. This double top target price is marked as purple dotted lines in the chart.

After this correction, the stock has been moving down to this demand area on low volumes. This indicates that a reversal is around the corner.

#4 Supports in the Weekly chart: As seen from the weekly chart, there is a resistance-turned-support level for the stock which is marked in green dotted line. The stock has also currently taken support near its 50-week SMA. 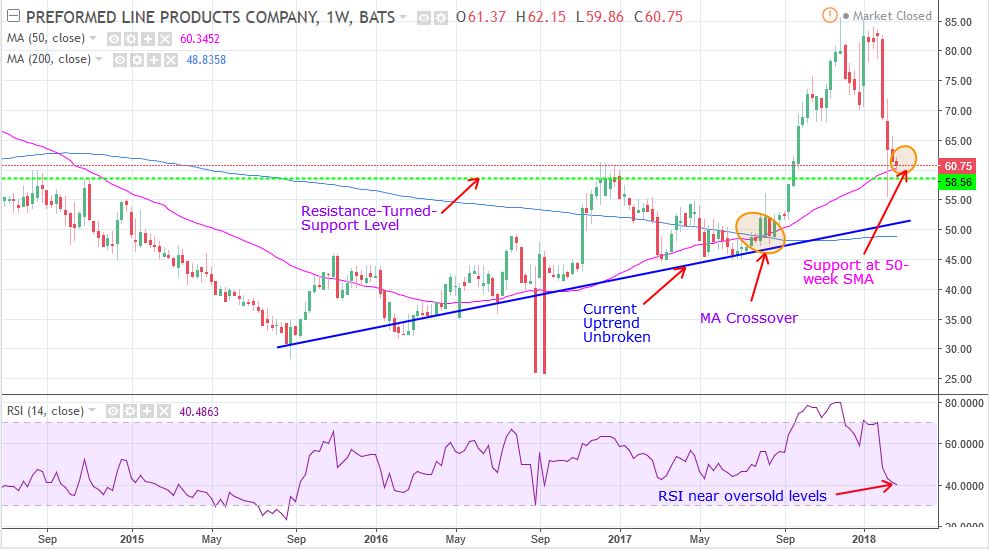 #5 Uptrend unbroken: The weekly chart of PLPC shows that the current uptrend of the stock is still unbroken, as the stock has been forming higher highs and higher lows.

#6 MA Crossover: The 50-week SMA had crossed above the 200-week SMA. This is also another bullish sign.

#7 RSI Nearing Oversold:  From the weekly chart of Preformed Line Products Company, it is evident that the RSI is near oversold levels.

Buy Price: If you want to get in on this trade, you can purchase shares of PLPC at the current price of $60.75.

SL: To limit risk, place a stop loss below the tail of the hammer candlestick (of double top pattern correction in daily chart) at $54.90. Note that this stop loss is on a closing basis.

Risks to Consider
The stock may reverse its overall trend if it breaks down with high volume from the uptrend line. The sell-off of the stock could also be triggered in case of any negative news, overall weakness in the market, or any regulatory changes in the sector.