After a crazy week last week and a roller coaster ride on Friday, stocks saw a big upside move yesterday and that had to be a relief to many investors. Personally, I don’t really care which way the market moves since by using options you can make money in either direction.

I think you have to look at it like being a trading mercenary and go with the side that is going to pay you the most money.

[hana-code-insert name=’adsense-article’ /]Right now, the majority of stocks are still in their long-term uptrends, but there are also stocks whose uptrends are questionable at this time.

One stock with an uptrend still in place is Eaton Corp. (NYSE: ETN).

The stock barely moved below its 50-day moving average last week and there is a good reason for that.

The company is really solid fundamentally and it is well diversified which insulates it to a degree if there is a slowdown in one industry or another. 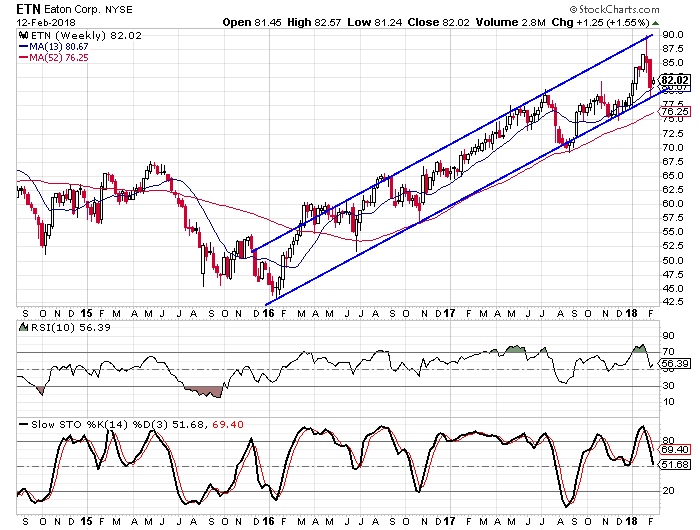 Eaton has formed a trend channel over the last few years and touched the lower rail of that channel at last week’s low before recovering a little. We see the stock managed to close the week above its 13-week moving average which shows that it handled the selling pressure from the last few weeks better than a number of other stocks. The sentiment toward Eaton hit its second lowest reading of the past year last week. The lowest reading of the past year came just before the big reversal last summer.

Buy to open the April18 80-strike calls on ETN at $4.60 or better. These options expire on April 20. There were a number of great stocks to choose from in last night’s scans, but I chose ETN because it took the smallest percentage move for the options to double. In this case we were able to buy a little more time and go with the April options and we still only need a gain of 8.8% for this option to double. With the volatility we have seen still being on my mind, I don’t want to give trade ideas that need a 15-20% move to produce 100% gains.