[hana-code-insert name=’adsense-article’ /]If you are keeping track, that is an 840-point drop in a little over four hours, followed by a 1,000-point rally in the final two and half hours. That is insane volatility.

As you can imagine the wild ride on Friday led to some rather interesting looking charts.

One of the more interesting ones to me was the VanEck Vectors Gold Miners ETF (NYSE: GDX). 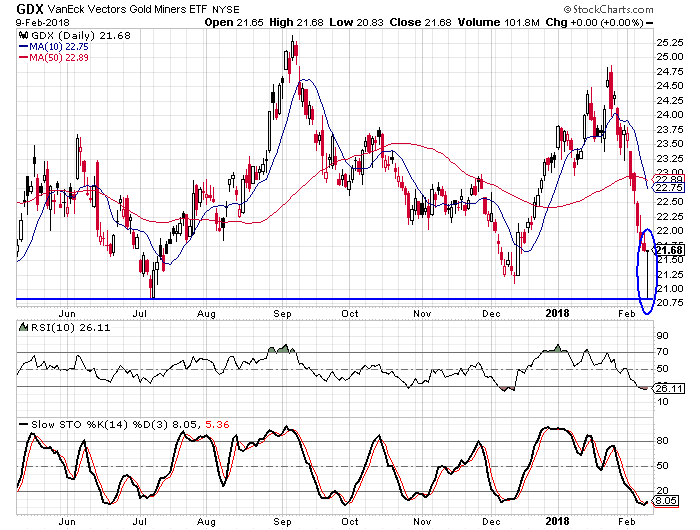 The huge recovery was interesting in several ways. First, the low of 20.83 was right at the low from July which was 20.82. It also created a long-tailed bottom like I have pointed out in previous trade ideas. We also see that it created a bullish crossover from the daily stochastic readings and the 10-day RSI is in oversold territory. The last time we had this same setup was in December and the fund rallied 17.8% from the low to the high. The sentiment is another factor in this trade idea as it was the most bearish it has been since last May during the past week.

Buy to open the March18 20.50-strike calls on GDX at $1.60 or better. These options expire on March 16. I would have rather gone out further on these options, but the April expirations aren’t available for trading yet. However, I still think this could be a huge opportunity. We only need a gain of approximately 8.4% from the current price for these options to double. Considering that is less than half of what happened in the December to January rally, it seems like a good risk/reward relationship. I would use Friday’s low of $20.83 as my stop-loss point on this trade.