The holiday season and Amazon partnership had pushed the stock higher in the near-term.

But now, a correction seems to be in the cards as per charts.

The stock seems poised to soar again after this correction.

#1 Channel Breakout: The daily chart of KSS shows that the stock broke out of an uptrend channel (marked in blue color) on January 10, 2018. After moving higher, the stock is currently showing signs of weakness and may pullback to the top of the channel before surging back again. 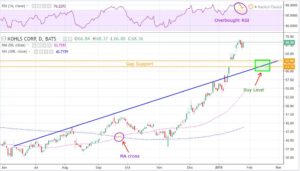 #2 Above MA: The stock is currently trading above its 50-day SMA as well as 200-day SMA. The 50-SMA had also crossed above 200-SMA. This indicates overall bullishness for the stock. 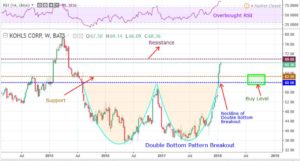 Note: The RSI in the daily and weekly chart is slightly overbought. The stock is also near a resistance level (marked in the weekly chart). So the stock might correct to around $60 to $63 in the near-term.

Buy Price: If you want to get in on this trade, you can purchase shares of Kohl’s when it corrects to a price between $60 and $63.

TP: Our target price is $85 based on the double bottom pattern breakout in the next 4-6 months. However, if the stock shows resistance at $80, book half the profit then.

In other words, this trade offers nearly 3X to 6X more potential upside than downside.

Risks to Consider
The stock may reverse its overall trend if it breaks down with high volume from the double bottom pattern breakout level. The sell-off of the stock could also be triggered in case of any negative news, overall weakness in the market, or any regulatory changes in the sector.