[hana-code-insert name=’adsense-article’ /]Once again there were a great number of stocks that are solid fundamentally and appeared simply because they are so overbought.

Something that I do with the scan results each night is enter the net total of bullish and bearish positions in to a calculation that sort of creates an overall barometer for the market, my own indicator if you would.

After the results of the last two days, my indicator reached a reading of -79.2 and that is the lowest reading for it since October ’15. The S&P peaked in early November that year before dropping over 14% through mid-January.

One stock that was on the bearish list that stood out because of its chart, fundamentals and sentiment was Philip Morris International (NYSE: PM). The chart caught my attention first with the downward-sloped trendline.

PM was down sharply yesterday as the FDA rejected the company’s smoke-free device. We see a similar decline back in October and the decline continued for several more weeks. 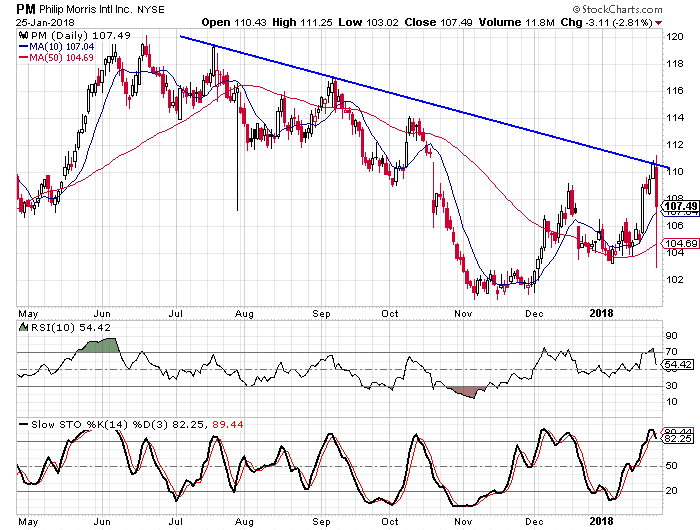 Buy to open the Mar18 110 strike puts on PM at $4.70 or better. These options will expire on March 16. Given the poor fundamentals, the pattern in the chart and the high sentiment reading, I look for PM to drop over the coming weeks. The stock could see some support in the $100.60 area which marked the lows in November, but that would put these options right at a double. I also like the fact that it will only take a decline of 6.4% to generate a 100% gain on these options.