#1 Channel Breakout: The daily chart of HEI shows that the stock was trading within an uptrend channel for the past 6 months.

This channel is marked in the daily chart in dark blue color.

This shows that the stock has gained momentum and has the potential to move further up.

There was also good volume during the breakout, indicating that the breakout could sustain this time around. 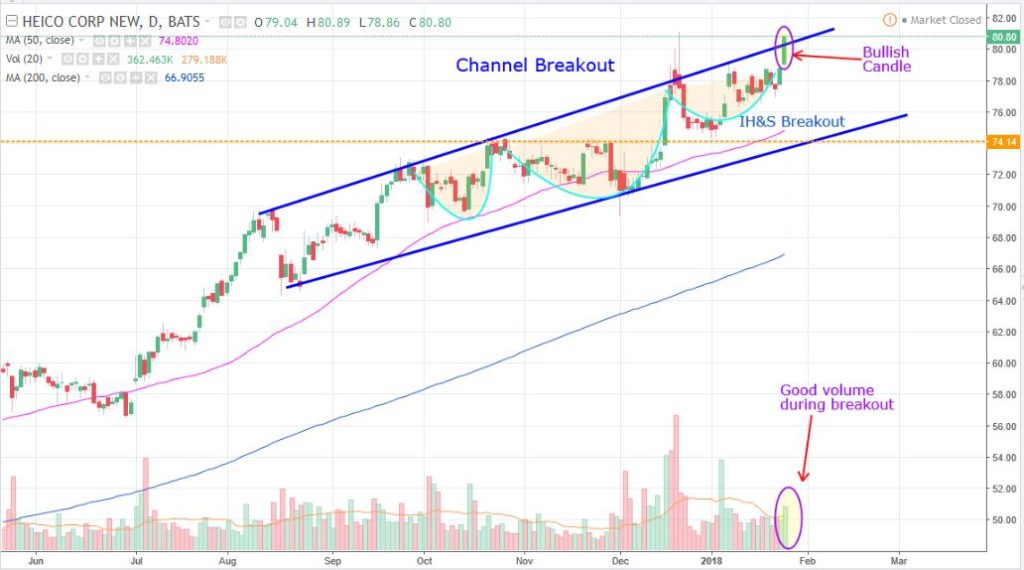 #2 IH&S Breakout in Daily chart: As you can see from the daily chart of HEI above, the stock has broken out of an Inverted Head and Shoulders (IH&S) pattern within the channel. This IH&S pattern is marked in the chart in light blue color. An IH&S pattern is a strong bullish pattern and indicates that the stock may move higher in the short term.

#3 Bullish Candlestick: The latest candle in the daily chart was a bullish candle and was formed with good volume.

#4 Above 30-week SMA: The weekly chart of HEI shows that the stock is currently trading above its 30-week SMA, which is shown in pink color. This indicates overall bullishness of the stock. 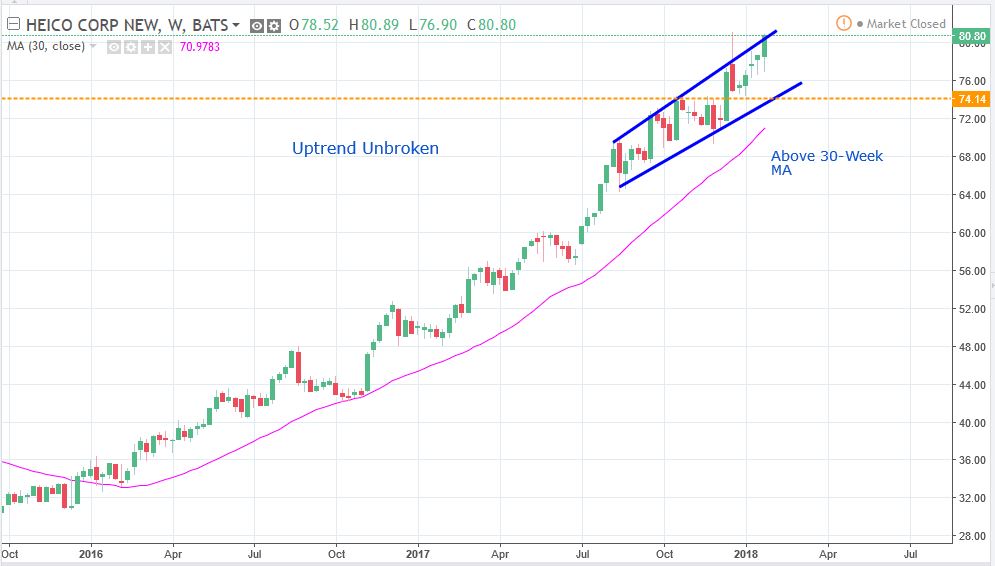 #5 Strong uptrend: The weekly chart of HEI shows that the stock has been in a strong uptrend for the past 2 years as it has been making higher highs and higher lows. This uptrend still remains unbroken.

Note: Even though the stock has broken out of the channel and could move further up, there is also a risk that the stock might correct as it has been on a steep uptrend in the recent months. So, make sure to follow the stop-loss strictly when you enter this trade.

Buy Price: If you want to get in on this trade, you can purchase shares of HEI at the current price of $80.80.

TP: Our target price is $92 based on the IH&S pattern breakout.

SL: To limit risk, place a stop loss at the low of the shoulder of the IH&S pattern. This translates to $74.10. Note that this stop loss is on a closing basis.

Our target potential upside is almost 14% in the next 3 months.

In other words, this trade offers nearly 2x more potential upside than downside.

Risks to Consider
The stock may reverse its overall trend if it breaks down with high volume from the Inverted Head and Shoulders pattern breakout level within the channel. The sell-off of the stock could also be triggered in case of any negative news, overall weakness in the market, or any regulatory changes in the sector.