[hana-code-insert name=’adsense-article’ /]One of America’s oldest REITs, Federal Realty Investment Trust (NYSE: FRT) seems to be poised for an upmove as per its latest charts.

FRT is well known for the fact that it has grown its dividend since past 49 years.

There are quite a few bullish indicators for FRT as per its charts.

#1 Channel Support: As you can see from the daily chart of FRT below, the stock has been trading inside a channel for the past few months.

Right now, it is near the lower end of the channel which is a good support level. 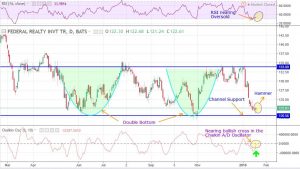 #2 Hammer: The latest candlestick in the daily chart is a Hammer, which is a sign of a possible bullish reversal.

#3 Double Bottom: In the daily chart of FRT, a double bottom was formed within the channel as shown in the figure in light blue color. A Double bottom pattern is a bullish reversal pattern, indicating that the stock would possibly move upwards shortly.

#4 RSI Nearing Oversold: In the daily chart, the RSI is near the oversold levels. This is also a possible bullish sign.

#5 Chaikin Bullish Cross: The daily chart of FRT shows that the stock is nearing bullish cross in the Chaikin A/D Oscillator. This is a possible bullish sign as the stock has historically moved higher on crossing the zero line of Chaikin Oscillator. 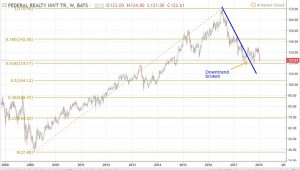 #6 Broken DownTrend Line: The weekly chart of FRT shows that the stock was in a short-term downtrend as the price was making lower highs and lower lows. The stock had broken out of this downtrend line on the week ending July 10, 2017. This shows that the correction might be over and the trend might reverse.

#7 Fibonacci Support Level: The weekly chart of FRT shows that the stock is currently near a long-term Fibonacci support level of 61.8%. This also further confirms the possibility of an upcoming reversal.

#8 Doji: The latest weekly candlestick is a Doji, indicating indecisiveness between buyers and sellers.

Buy Levels: If you want to get in on this trade, you can purchase the shares of FRT at the current price level of $122.61.

TP: Our target price is the top of the channel in the daily chart. This translates to around $133.

NOTE: If the stock breaks out of this target level with high volume, hold on to the trade until the stock reaches $145.

SL: To limit risk, place a stop loss at $118.20, which is below the 61.8% Fibonacci retracement level on the weekly chart. Note that this stop loss is on a closing basis.

Note: Once the stock breaks out with high volume from target price level of $133, the second target price of $145 offers a 1:5 risk-reward trade and a target potential upside of 18.26% in next 5 months.

Risks to Consider
The stock may reverse its overall trend if it breaks down with high volume from the long-term Fibonacci support level. The sell-off of the stock could also be triggered in case of any negative news, overall weakness in the market, or any regulatory changes in its sector.