The retail sector has been one of the hottest sectors over the past few months.

The SPDR S&P Retail ETF (NYSE: XRT) has outperformed all of the ten major sectors in the past three months.

[hana-code-insert name=’adsense-article’ /]There are a handful of stocks that haven’t done well, but the bulk of the retail industry has done well and Urban Outfitters (Nasdaq: URBN) is no exception.

In fact it has been one of the top performers from the retail sector.

The chart shows that the stock dipped a little recently, but it didn’t even take the stock below its 50-day moving average.

It did however take the daily oscillators down to their lowest levels in the last three months.

Over the last few days, the oscillators have reversed and are showing a pattern similar to what we saw in August and October.

The circles on the stochastic readings mark the crossovers where the stock went on to gain over 45% in both instances. 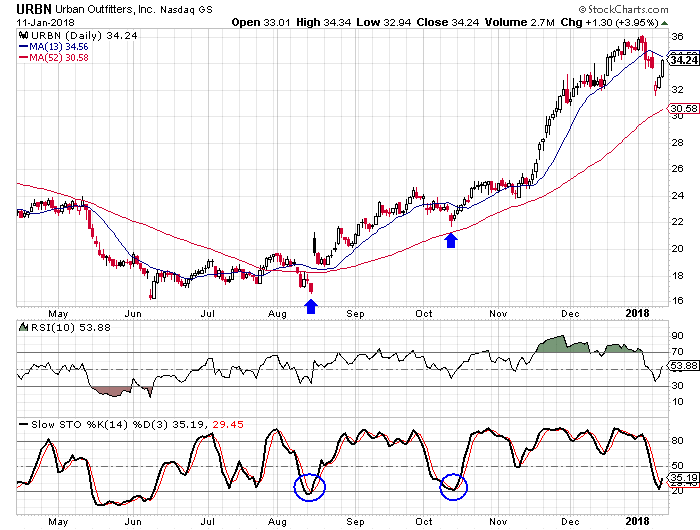 The sentiment hit an extreme low on Tuesday and the two arrows on the chart are for August 15 and October 12. Those were the only two times in the last six months where the sentiment has been as low as it was on Tuesday.

Buy to open the March18 32 strike calls on URBN at $4.00 or better. Given the gains of the two most recent rallies that lined up like the current situation, it would seem greedy to shoot for another 45% gain. However, a gain of a little more than half that size from the $32 area would put the stock up around $40 and would mean the option had doubled. If the move were to happen quickly and you wanted to see if the pattern repeats and it sees another gain of 45%, you can always sell half of your options at the 100% profit level and leave the other half open to see how high the stock can go. A gain of 45% from the $32 level would put the stock at $46.40 and the option would be $14.40 in the money. While I wouldn’t necessarily set that as my target, that would be a 260% gain on these options.