San Francisco-based multinational logistics real estate investment trust company Prologis Inc. (NYSE: PLD) seems to be getting ready for a surge after a pullback according to its latest charts.

There are quite a few bullish indicators in the daily chart of PLD.

This is marked by the green ellipse. In the bullish harami pattern, a bearish candlestick (red) of previous day engulfs the body of the latest small bullish candlestick (green).

This pattern is considered as a sign of a reversal of the downward trend. 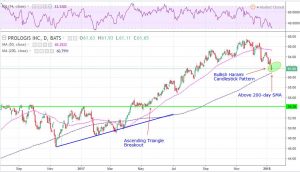 #2 200-day SMA Support: As you can see from the daily chart, the stock is currently trading near its 200-day SMA. This usually acts as a good support for the stock.

#4 RSI nearing Oversold: In the daily chart, the RSI is near 33, indicating that it is nearing oversold levels. This implies that a possible reversal is around the corner. 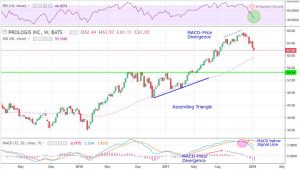 Reasons for Some More Correction

The stock may correct until $54.54 (which is the ascending triangle breakout level) due to the following reasons.

Buy Levels: If you want to get in on this trade, the ideal buy level is when PLD pulls back and reaches $54.54. This is marked in the charts as a green line.

TP: Our target price is based on the Ascending Triangle pattern breakout. This translates to around $80.

Our target potential upside is nearly 47% in the next 6 months. For a risk of $6.04, the target reward is $25.46. This is a 1:4 risk-reward trade. In other words, this trade offers nearly 4X more potential upside than downside.

Buy Levels: If you are looking for a speedier entry, you can buy half the intended quantity of the stock PLD at the current price of $61.65.

Risks to Consider
The stock may reverse its overall trend if it breaks down with high volume from the ascending triangle breakout level. The sell-off of the stock could also be triggered in case of any negative news, overall weakness in the market, or any regulatory changes in its sector.