[hana-code-insert name=’adsense-article’ /]If you’re just joining us, a “10% Trade” is a conservative income-oriented trade that involves selling either a covered call or a cash-secured put on a reasonably-priced, high-quality dividend growth stock.

While these trades typically last six to 10 weeks, this time frame isn’t set in stone.

Regardless of how long they last, at the end of the day, a “10% Trade” is designed to generate safe, 10%-plus annualized yields.

That’s precisely why they’re so attractive to anyone looking for a low-risk way to boost their income.

In fact, one of the many neat things about a “10% Trade” is that you could potentially generate hundreds of dollars in extra income for simply agreeing to buy and sell shares of the same exact stock at the same exact price.

I realize that sounds crazy, but consider a couple real-life, real-money trades I’ve already shared with Trades Of The Day readers…

That’s $400 in income for simply agreeing to buy and sell shares of Wal-Mart at the same exact price.

Of course, setups like these don’t present themselves all the time — but when they do, I try to take advantage of them.

With this in mind, one such opportunity just came up with International Business Machines (IBM).

Here’s how it works…

There are only two possible ways this new trade will work out… and they both spell at least double-digit annualized yields on my $162.50 purchase price. 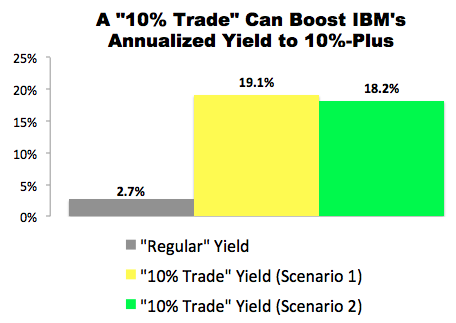 When I subtract out the commissions I’m looking at a 1.0% yield in 19 days… which works out to a 19.1% annualized yield. That’s seven times IBM’s “regular” annual dividend yield of 2.7%. I’ll take it!

After subtracting out the commissions, I’m looking at a 0.9% total return in 19 days, which works out to an 18.2% annualized yield from IBM.

Bottom Line: Either way this “10% Trade” works out offers me the opportunity to pull in at least a 10% annualized yield from International Business Machines (IBM). As long as the market continues to offer safe, income-generating opportunities like this one, I’ll be more than happy to take them.

The Bulls Are Gaining Control of This Stock

Upgrades and Downgrades for Tuesday, 2/7

Down 14%, This Growth Stock is a Buy Right Now