Please keep in mind that these “10% Trade” alerts are for information purposes only. We’re not registered financial advisors and these aren’t specific trade recommendations for you as an individual. Each of our readers have different financial situations, risk tolerance, goals, time frames, etc. The ideas we publish are simply ideas that we feel fit our specific needs and that we’re personally making in our own portfolios. You should also be aware that some of the trade details (specifically stock prices and options premiums) are certain to change from the time we make our trade to the time you’re alerted about it. So please don’t attempt to make this “10% Trade” yourself without first doing your own due diligence and research.

A quick look at its year-to-date chart, and you’ll notice that Wal-Mart (WMT) has been all over the place… 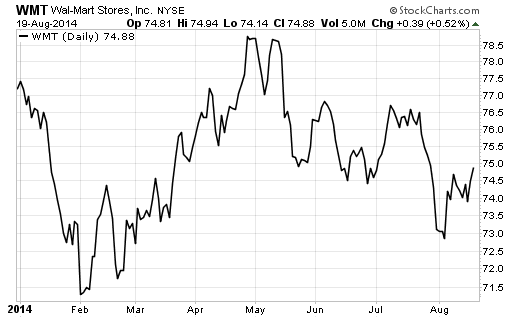 While the stock’s price action has likely frustrated many investors, it’s been favorable for some well-timed “10% Trades.”

In other words, these trades are doing exactly what they’re supposed to: generate safe, 10%-plus annualized yields. Take a look…

While I already own Wal-Mart in my long-term dividend growth portfolio — and plan on holding it for the long-haul — I’m always open to potential “10% Trade” opportunities with the stock that could continue to both boost my income and reduce my risk.

[hana-code-insert name=’adsense-article’ /]With this in mind, I made another “10% Trade” with Wal-Mart yesterday.

The trade should generate a 10.5% to 11.1% annualized yield, which is significantly more income than what I’m collecting from my “buy and hold” shares.

This is especially important since Wal-Mart could be headed lower in the short-term.

There are only two possible ways this trade will work out… and they both spell at least double-digit annualized yields on my $75 purchase price — the price I just bought the stock for. 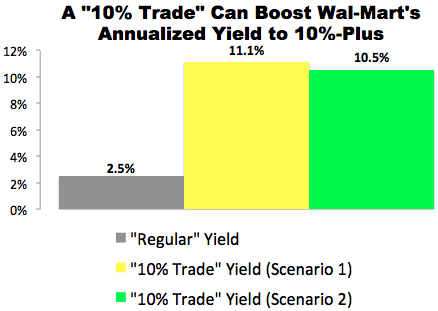 When I subtract out the commissions I’m looking at a 1.0% yield in 32 days… which works out to an 11.1% annualized yield. That’s more than quadruple Wal-Mart’s “regular” annual dividend yield of 2.5%.

So I’m getting paid to buy and sell the stock at the same exact price.

In this scenario, after commissions I’ll be looking at a $137.42 profit.

That works out to a 10.5% annualized yield from Wal-Mart.

Bottom Line: Either way this “10% Trade” works out offers me the opportunity to both boost my income and reduce my risk with my shares of Wal-Mart (WMT).