Chart patterns help in identifying the upcoming price movements.  These trading signals can be used to buy or sell stocks and help plan better entries and exits.

Here is a brief overview of each of them.

Head and Shoulders Pattern is a bearish pattern that indicates a trend reversal from a bullish bias to a bearish bias.

The pattern appears like three distinctive peaks (hills) during the time when the price is trending upwards for the stock. Among these three peaks, the peak in the middle would be higher than the other two peaks. Overall, it appears like the head and shoulders of a person. The ‘neckline’ of the pattern would be formed by joining the two armpits.

Once the pattern is confirmed, price breaks down from the neckline. The figure below shows a head and shoulders pattern. 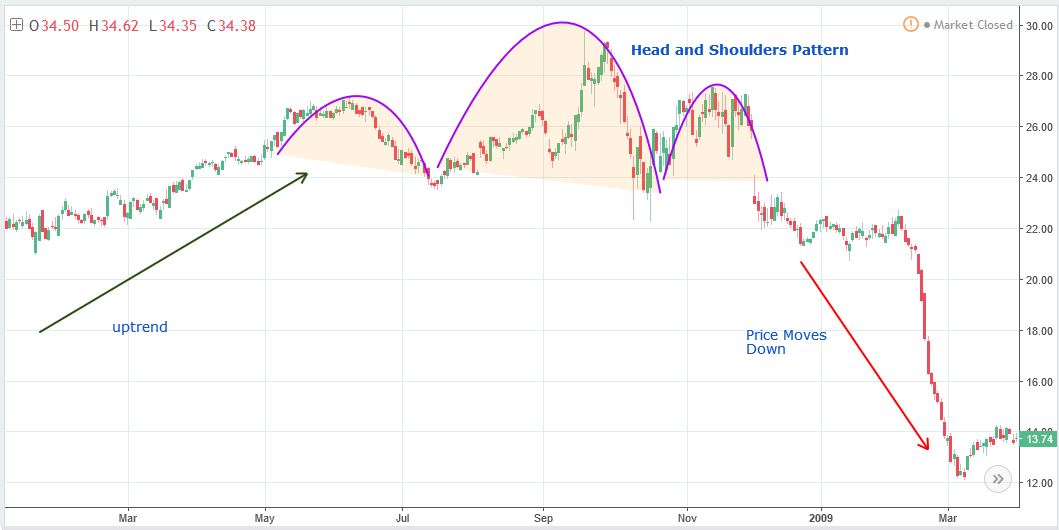 A Double Top Pattern indicates a trend reversal from a bullish bias to a bearish bias.

The pattern appears like two distinctive peaks (hills) that are almost equal. This pattern is formed when the price of the stock is in a significant uptrend. Once the pattern is confirmed, the price breaks down from the trough formed between the two peaks. Many times, the decline in the price after break-down from the trough depends on how high the formation was. This means that bigger the peaks, bigger the declines.

The figure below shows a double top pattern.

Just like the Double Top pattern, a Triple Top Pattern is also a bearish reversal pattern, where the trend changes from bullish to a bearish bias. Initially, the price would be trending upwards.

The pattern appears like three distinctive and roughly equal highs, appearing like peaks (tops) with two troughs in between them. Once the pattern is confirmed, the price breaks down from the level of the trough formed between the three peaks.  Usually, there would be a sharp increase in volume and momentum before the break down happens. The figure below shows a triple top pattern.

A Rounding Top Pattern is also called as inverse saucer pattern in many technical analysis books. It foreshadows a possible trend reversal from a bullish to a bearish bias.

The pattern seems like an inverted ‘U’ shape and can indicate an opportunity to go short. The initial price trend would be upwards. After a rally upwards, the price consolidates for an extended period, forming the rounding top. Usually, there would be an increase in volume during the advances and decrease in volume during the sideways price action.

Once confirmed, price breaks down from the pattern’s support line. The figure below shows a rounding top pattern.