As inflation spiked following the pandemic and global central banks began the fastest rate-raising cycle in modern history, virtually all growth stocks that didn’t make much in current profits got sold off hard — as in 50% or more.

While certainly some deserved that massive rerating, even many of the best-run growth names with excellent competitive positions and long-term growth prospects sold off in a big way as well.

Heading into 2023, it’s likely we will see inflation come down and the end of the rate-raising cycle at some point. When that happens, these two former darlings, down 60% and 85% from their prior highs, could start another big ascent. 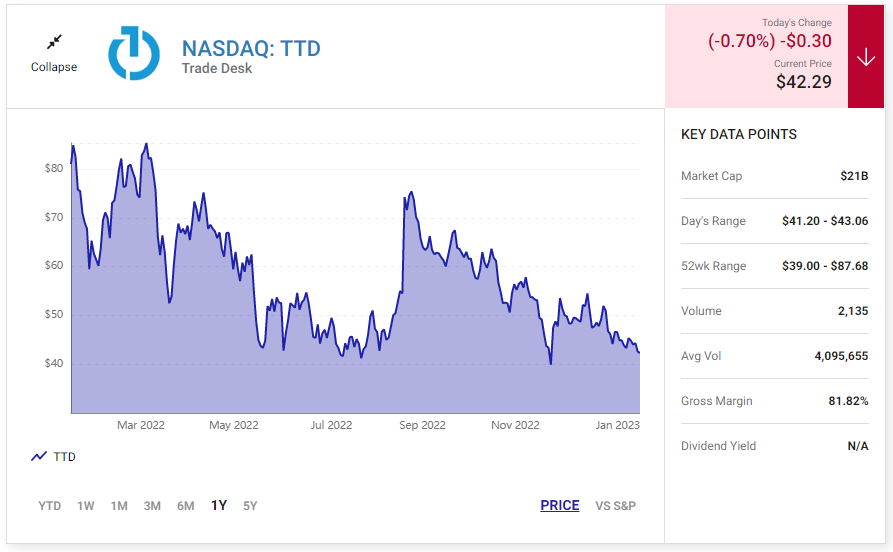 The Trade Desk
Although the stock of programmatic ad platform The Trade Desk (TTD) is down 60% from all-time highs, its underlying business may be better positioned than ever. While its bigger search and social media rivals grew revenue either in the single digits or even posted a negative number last quarter, The Trade Desk managed to grow at 31%.

That’s indicative of The Trade Desk’s taking market share in digital ads, and for good reason. The Trade Desk is a leader in programmatic advertising, in which, instead of manually buying ads, an advertiser will use big data and algorithms to only show ads to certain people, hopefully in the right place in the right time. The Trade Desk helps advertisers efficiently buy ads to target consumers across connected TV, mobile, display, and audio. Coordinating campaigns across all formats raises the efficiency of ad programs, which operated in a less precise manner before programmatic technology.

Given the current environment, in which advertisers are looking to stretch every dollar and measure their advertising spend more precisely, it’s perhaps no surprise that programmatic advertising is taking off. That’s especially true in “connected TV,” as virtually all streaming services are now putting forth ad-supported tiers, even prior holdouts such as Disney+ and Netflix.

On the recent conference call with analysts, CEO Jeff Green noted that connected TV remains by far the highest-growth segment for The Trade Desk and now makes up a low-40% share of the company’s revenue. As connected TV makes up an increasingly larger share of Trade Desk’s revenue, and since it’s the highest-growth segment, that should help The Trade Desk continue its healthy growth trajectory for quite a while.

Furthermore, Greene notes that more and more companies have been willing to share their first-party data into a shared platform called Universal ID 2.0. As new privacy rules kicked in last year and the use of third-party cookies is set to end in 2024, more advertisers are willing to pool their first-party data linked to an anonymized version of one’s email address. TTD has been at the forefront of UID2 and has been innovating toward that vision, which could become the best standard for digital ad targeting.

Even better, The Trade Desk is profitable, with adjusted (non-GAAP) net income margins exceeding 30% of revenue as of last quarter.

While the Trade Desk is profitable, it did trade at quite a high multiple coming into 2022, which explains part of the sell-off, along with fears over the digital ad market in 2023. Still, given its reduced multiple as well as its outperformance versus its peers, The Trade Desk stock looks like a solid opportunity for the long-term investor at the start of 2023.

Sea Limited
Unlike the Trade Desk, Southeast Asian superapp Sea Limited (SE) was not profitable, and by a wide margin, heading into 2022. Even in the most recent third quarter of 2022, Sea Limited had an adjusted EBITDA loss of $357.7 million, up from a $165.5 million loss in the year-ago third quarter. Given the market’s fear of unprofitable companies as interest rates have risen, no wonder the stock is down 85% from its all-time high!

Yet there is actually quite a lot of improvement going on under the hood at Sea, which could deliver surprising profitability in 2023 and beyond.

You see, Sea has three major segments: gaming, e-commerce, and digital financial services. Before 2022, only Sea’s gaming division was profitable, while the Shopee e-commerce and SeaMoney digital financial services platforms each had significant operating losses. Yet on the other hand, Shopee and SeaMoney are each much earlier in their growth trajectories.

Yet on the other hand, Shopee’s adjusted EBITDA losses narrowed from $683.8 million to $495.7 million over that time, a 27.5% improvement. Moreover, even that underrated Shopee’s core improvement, as one-time severance and lease termination expenses were included in that figure. In addition, Shopee’s core Asian markets were even more profitable, as the majority of that loss was realized in the Brazilian market, where Shopee is earlier in its lifecycle. Meanwhile, Brazilian e-commerce revenue surged by a whopping 225%, and loss per order improved 27.4% over the previous quarter in that geography.

In addition, SeaMoney continued very strong top-line growth of 147.2%, and adjusted EBITDA losses in that division improved by 57.4% year over year to just a $67.7 million deficit, which seems to indicate profitability will come next year.

So while Sea’s gaming division remains a question mark — it could rebound, or it could continue to stagnate — the Shopee and SeaMoney divisions should continue growing rapidly with improving profitability, and those divisions have much larger market opportunities. Management has given itself the goal of achieving EBITDA breakeven for Shopee by the end of 2023, and it looks as though SeaMoney is on the same track.

Zooming out a few years, Sea has tremendous growth opportunities as the market leader in e-commerce and digital financial services in Southeast Asia, which is set for rapid digitization and adoption of internet services this decade. Once Sea’s overall business achieves profit self-sufficiency, probably by the end of 2023, management has said it will once again invest in its large growth opportunities. Trading at just 2.5 times sales, Sea could begin another explosive growth phase after it gets through this difficult consolidation period.