Despite a once-in-a-century pandemic standing in the way, investors enjoyed three straight years of strong stock market returns in 2019, 2020, and 2021. But 2022 has been an entirely different story; the economic winds have shifted, and companies are grappling with high inflation and rising interest rates.

The S&P 500 index has lost over 15% year to date, and if the year ended right now, it would be the worst result since 2008 when the global financial crisis rocked the world.

But there are some early signs that inflation has peaked, which could ease the pressure on consumers and businesses alike. With 2023 right around the corner, that sets the stage for a potential rebound in the market, and here are two stocks worth buying while they’re still trading at a discount.

Bill.com continues to grow at a lightning pace
In a tough economic environment where consumer spending is constrained, small businesses are often the first to suffer and so they tend to invest less money in growth and general improvements. But Bill.com (BILL -4.82%) continues to experience robust demand for its payments software, which streamlines the accounts payable and accounts receivable workflows, in addition to budgeting and expense management. 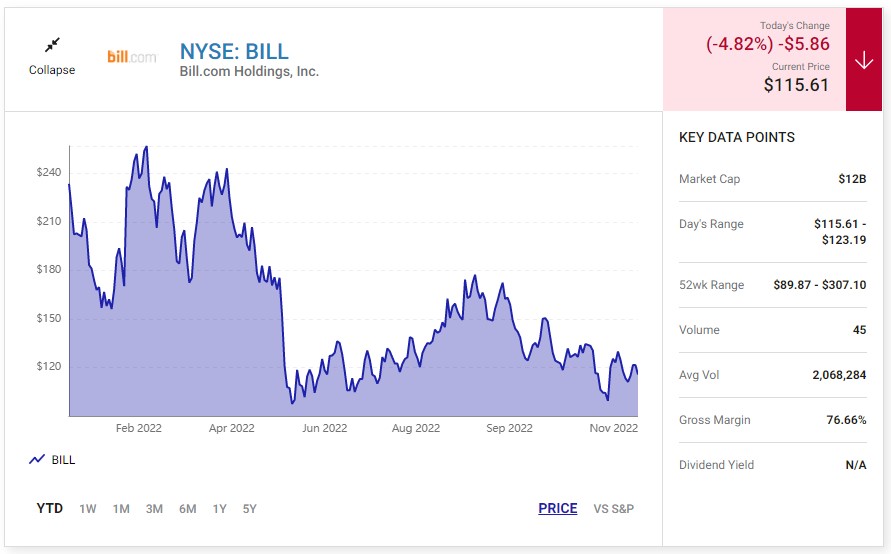 Its flagship digital inbox is designed to eliminate messy paper trails by allowing businesses to upload (or receive) all of their incoming invoices into one central location. From there, the platform allows bills to be paid with a single click, and it also logs each transaction in the business’s choice of bookkeeping software. It accomplishes this using cloud computing technology, which makes Bill.com’s tools available from anywhere, at any time.

In the recent first quarter of fiscal 2023 (ended Sept. 30), the company served 420,000 business customers and it’s currently processing transactions at an annual run rate of $250 billion.

While Bill.com’s revenue has slowed, it still grew by a whopping 94% year over year during Q1. It also reported a net retention rate of 131%, which means its existing customers are spending 31% more each year with the company. That’s indicative of how useful Bill.com’s tools are — despite challenging economic conditions, businesses are still increasing their spend.

Bill.com stock is currently down 51% this year, but that might be a golden opportunity right now. Why? Besides the company’s rapid growth, Wall Street is extremely bullish. Of the 24 analysts tracked by The Wall Street Journal, 22 of them have given the stock the highest-possible buy rating. The other two are neutral, and not a single one recommends selling.

If the economy does improve in 2023, Bill.com stock could be set for a very strong rebound. 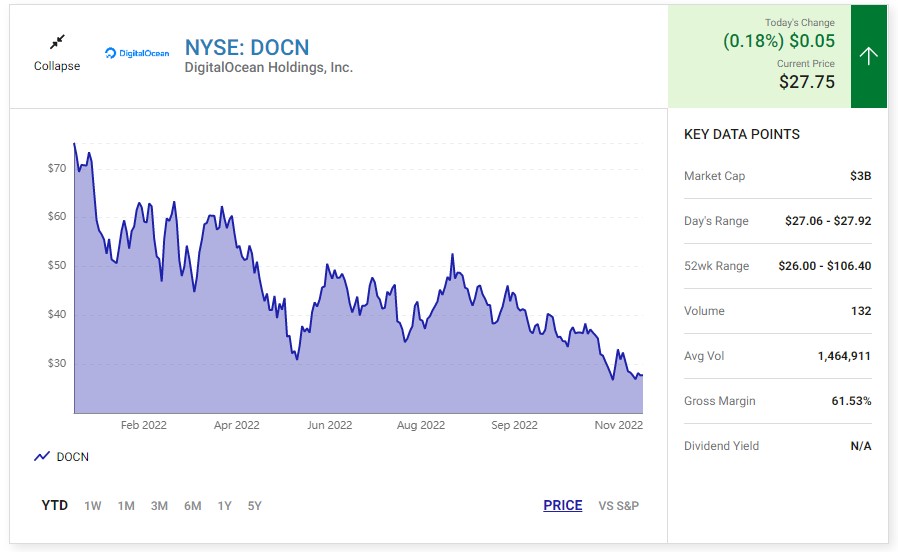 DigitalOcean has carved out a lucrative niche in the fast-growing cloud services industry. It targets small to mid-sized enterprises, which often fall through the cracks at larger providers like Amazon Web Services (AWS) and Microsoft Azure. Those smaller operations need personalized service, cheap pricing, and easy-to-use tools, because they don’t have the budget to retain highly paid technical staff.

DigitalOcean delivers all of that and more, including an online library filled with thousands of educational resources to help customers get the most out of their cloud experience, whether they’re using simple data storage, deploying virtual machines, or building complex software.

And they appear to love the platform, because DigitalOcean’s net retention rate hit a record high of 118% in Q3, meaning existing customers are spending 18% more each year with the company.

DigitalOcean’s revenue soared by 37% year over year to $152 million, crushing AWS (27%) and Microsoft’s intelligent cloud segment (20%). It also reported a record high average revenue per user, and a record number of customers spending at least $50 per month. And that’s in a weak economy!

But the kicker is the company’s long-term potential. It values its addressable opportunity at $72 billion in 2022, which could double to $145 billion by 2025. DigitalOcean stock might be down 65% so far in 2022, but the company is firing on all cylinders from an operational perspective. This might be a great opportunity to buy ahead of what should be a more favorable new year.