Investors anxiously await the quarterly release of Berkshire Hathaway’s (BRK.A) (BRK.B) 13-F regulatory filing. It reveals which stocks Warren Buffett’s holding company bought and sold during each quarter, and that gives investors lots of food for thought about investments.

The third-quarter filing offered some interesting news for Buffett-followers, such as a new position in building products company Louisiana-Pacific. Along similar lines, Berkshire Hathaway expanded its position in luxury furniture company RH (RH). Let’s take a look at why Buffett likes this cheap stock, and why you might want to consider it for your portfolio as well.

The all-important moat
Buffett has said in the past that every great business has a moat. A moat is a competitive advantage that’s enduring, and it can be any differentiating factor that gives the company an edge against competition. 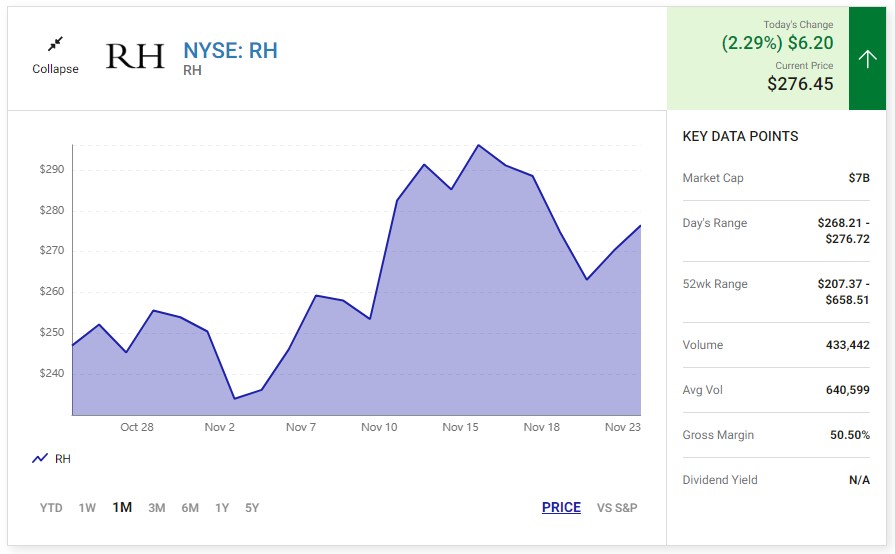 For RH, its moat is in its branding. The company is building a brand that it markets as an experience, including upscale restaurants and guesthouses that bolster its luxury image. When shoppers buy into this story, they bring a bit of the experience into their homes.

The focus on this population provides some cushion for RH during rough times. Its target customer is affluent and resilient to economic challenge. CEO Gary Friedman has reiterated that the company would not dilute its brand with promotional rates, even in the tough operating environment and even at the expense of losing some of its less affluent clientele. Focusing on quality sets it up to get back to stronger growth when the time is ripe.

Revenue growth may be slowing down in this environment, but sales did increase slightly in the second quarter (ended July 30), and they are significantly higher than they were before the pandemic. 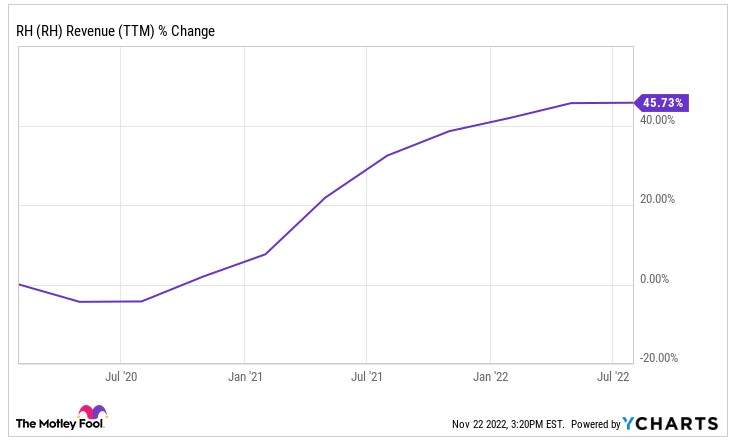 Because it can charge higher prices, it has also demonstrated robust profitability for a long time. Earnings per share fell over last year in the second quarter, from $7.09 to $5.37, but were still positive.

The combination of a resilient customer population, higher margins on its products, and its cultivated branding put RH in an enviable position going forward.

Is RH stock undervalued?
Berkshire Hathaway first opened a position in RH in 2019, right before it made a huge ascent. As of the end of 2021, it owned 8.8% of RH’s total outstanding shares. After the new stock it purchased last quarter, it now owns 9.9% of the company. Even though RH stock is down 58% over the past year, it’s up 54% since Berkshire Hathaway’s original position.

At the current price, RH stock trades at the very low valuation of 10 times trailing 12-month earnings. A low multiple may not mean much if there aren’t considerable growth opportunities. But in many ways, RH is just getting started. It operates fewer than 120 total stores, including outlet stores and stores under the Waterworks label. It is opening up new stores, or what it calls galleries, in key locations, and it’s also expanding internationally for the first time with a planned launch in the U.K.

Does RH stock belong in your portfolio?
Berkshire Hathaway doesn’t typically provide reasoning for its equity decisions. The investment in Louisiana-Pacific seems contrarian considering the depressed housing market although that company specializes in materials, and there’s still a housing shortage in the U.S.

Expanding the position in RH specifically now could be a nod to the company’s expectations for several new launches that were pushed back and should provide fresh sales avenues.

RH has a clear direction with a differentiated strategy, strong management, and compelling growth prospects. RH stock is trading at a low valuation, and considering its potential, the shares look undervalued. Buffett likes this stock, and it looks like a strong candidate for any diversified portfolio.