At the end of 2021, tech giants Alphabet (GOOG) (GOOGL) and Microsoft (MSFT) were collectively worth more than $4.4 trillion. But that figure has fallen to $2.7 trillion over the last 10 months, showcasing how much investor sentiment has soured in response to lingering inflation and quickly rising interest rates.

Since last peaking, Alphabet and Microsoft have seen their share prices plunge 44% and 38%, respectively, leaving both stocks near a 52-week low. Neither company has seen a sell-off of that magnitude at any point in the past 10 years, which makes this a once-in-a-decade buying opportunity.

Here’s what investors should know. 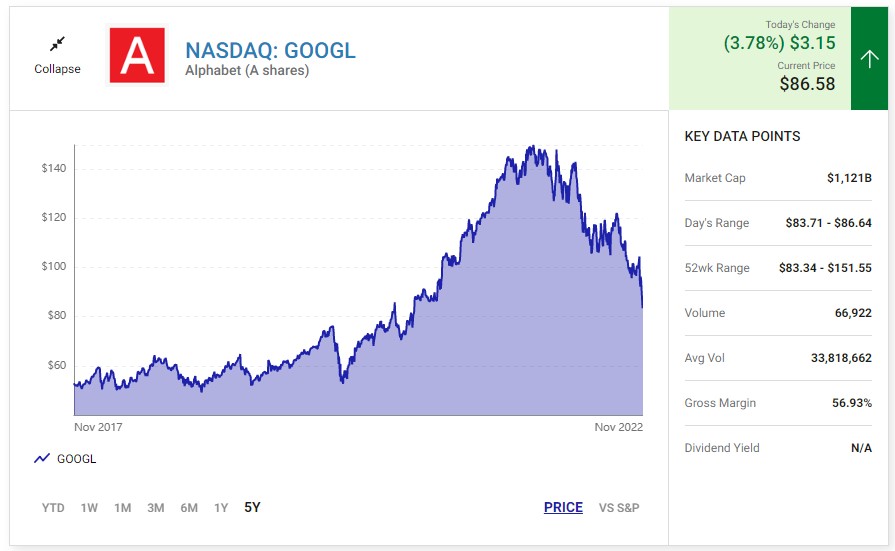 1. Alphabet: The market leader in digital advertising
Alphabet missed Wall Street’s guidance across the board in its third-quarter earnings report. Total revenue climbed just 6% to $69.1 billion, and net income fell 24% to $13.9 billion. Google Cloud was the one bright spot. That segment posted 38% revenue growth, though its operating loss widened slightly.

However, as CEO Sundar Pichai pointed out during the earnings call, those weak results were “impacted by lapping last year’s elevated growth levels and the challenging macro climate.” In other words, there is no material weakness in the underlying business, and there are still plenty of reasons to be bullish.

First and foremost, Alphabet is an advertising colossus, and its prowess arises from web properties that cannot be easily replicated. Google Search is built on years of carefully crafted search algorithms and artificial intelligence (AI) models, and it holds 92% market share among search engines. Google is basically the doorway to the internet, and that makes it a valuable partner to marketers. Similarly, YouTube surpassed Netflix (NFLX) in September to become the most popular streaming platform, and a recent study from Pew Research says 95% of teens use YouTube far more than any other social media platform.

Meanwhile, Alphabet is gaining ground in cloud computing. In the third quarter, Google Cloud Platform (GCP) accounted for 9% of cloud infrastructure spend, up from 8% in the same period last year, according to Canalys. It still trails the leaders, Amazon (AMZN) Web Services and Microsoft Azure, by a wide margin, but research company Gartner recently noted that GCP had the “highest percentage of revenue gains and improvements” of any cloud provider over the past year.

With that in mind, shares currently trade at 16.6 times earnings — the cheapest valuation in the last five years — creating an attractive buying opportunity for investors that have been eyeing this growth stock. 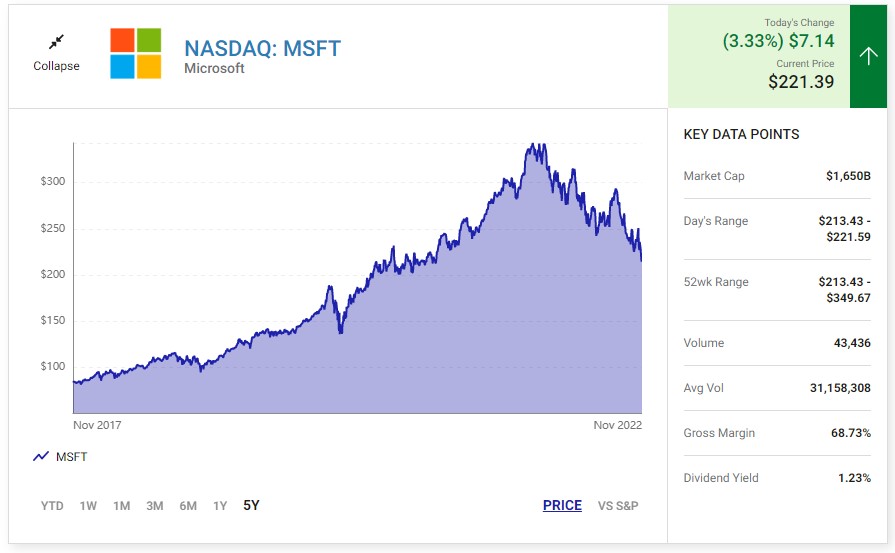 2. Microsoft: The market leader in business productivity software
Microsoft topped Wall Street’s estimates in the first fiscal quarter of 2023 (ended Sept. 30, 2022). Revenue rose 11% to $50.1 billion, and earnings dropped 13% to $2.35 per diluted share. That said, earnings actually increased 11% when adjusted for currency fluctuations and a one-time tax benefit last year. In this case, it was guidance that failed to impress. Management said weakness in PC demand and decreased ad spend on LinkedIn and Bing would carry into the next quarter, and that kept the stock on a downward trajectory.

In this situation, investors need to look at the big picture: Countless businesses and consumers rely on Microsoft’s software and cloud services. In fact, some of its products are so critical that the world might actually devolve into chaos if the company were to disappear tomorrow.

Office 365 is the gold standard in office productivity applications, but Microsoft is also a leader in other software categories, including enterprise resource planning, business analytics, low-code application development, and communications. Digital transformation should be a tailwind for all of those markets, but Microsoft has even more exciting growth opportunities in cloud computing and cybersecurity.

Microsoft Azure has invested heavily in areas like developer tools, data and AI, and hybrid cloud solutions, and those investments continued to pay off over the past year. Azure Machine Learning, a service that helps data scientists build and deploy AI models, has now notched 100% revenue growth for four consecutive quarters, and Microsoft Azure increased its share of the cloud infrastructure market to 22%, up from 21% in the prior year.

Meanwhile, industry analysts have also recognized Microsoft as a leader in several verticals of the cybersecurity industry, including extended detection and response, access management, and security information and event management. Not surprisingly, those accolades have come alongside particularly impressive growth. Cybersecurity revenue soared 40% in fiscal 2022 (ended June 30), and Microsoft increased its security customers by 33% in the most recent quarter. That bodes well for the future. The cybersecurity market is expected to increase by 12% per year to reach $500 billion by 2030.

In a nutshell, Microsoft’s arsenal of mission-critical software products and cloud services should keep the company in growth mode for years to come. And with shares trading at 23.1 times earnings — the cheapest valuation in the last three years — now is a good time to buy this growth stock.