As a long-term growth investor, I love to buy short-term dips in long-term winners.

If you had been an Innovation Investor subscriber – my elite investment research service – you’d have received advanced notice to buy the short-term dip in long-term EV winner Rivian (RIVN).

Since then, Rivian stock has popped a quick 11% against a sub-2% gain for the S&P 500, so the investment is panning out thus far: 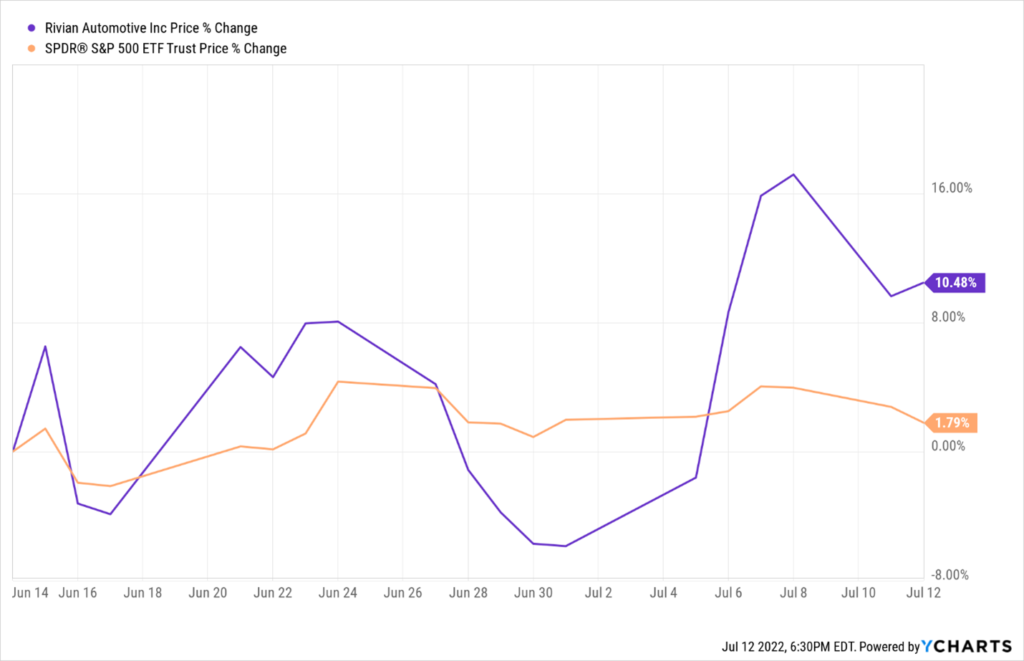 But I think things are just getting started with Rivian stock.

You may have heard that – despite all the talk of chip shortages and soaring lithium prices – Rivian delivered 4,467 vehicles last quarter. That’s up an astounding 264% from Q1’s delivery total.

You may have also heard that Rivian reaffirmed its target for 25,000 cars produced this year, even in the face of a dramatically slowing economy. And deliveries are expected to rise another 65% next quarter and 23% the quarter after that.

Oh, and perhaps you heard that Apple (AAPL) CEO Tim Cook took a spin in Rivian’s R1T pickup truck this past weekend to the Sun Valley Conference in Idaho. It’s essentially a “summer camp for billionaires,” so you know all the big power players took notice of Cook’s choice in EV.

Folks, things are heating up at Rivian. This disruptive EV maker is on the cusp of enormous growth over the next few quarters. Alongside all that growth, I fully expect Rivian stock to keep rebounding with vigor.

The Quick Rundown on Rivian

Before I go any further about why Rivian stock is a great EV play to buy today, let’s revisit Rivian’s fundamentals.

As an EV startup designing, manufacturing, and selling high-end electric SUVs and pick-up trucks, Rivian is widely considered among the most technologically advanced and promising pure EV makers in the world today.

The company started delivering units of its first model – the R1T – in 2021. It’s an electric pick-up truck that seats five, has a 54×50-inch bed and gets roughly 300 miles per charge. It can tow up to 11,000 pounds and has a 0-to-60 mph time as quick as three seconds. The interior is comprised of vegan leather, with a panoramic all-glass roof and a custom enhanced audio system.

Rivian’s second model is an electric SUV dubbed the R1S. It’s a large-format SUV that can comfortably seat up to seven passengers and their gear. It, too, gets roughly 300 miles of driving range on a single charge and can accelerate from 0-to-60 mph as quick as three seconds. It has all-wheel-drive capability and is outfitted with the same interior fittings as the R1T: vegan leather interior, all-glass panoramic roof, and a custom enhanced sound system.

R1S deliveries have just barely begun, with the company shipping models to employees only. Public delivery is expected to start in August or September. And the starting price is $72,500.

Rivian went public in a highly-anticipated and briefly super-successful IPO last year. The stock has since struggled after a brief hot run. Today, the company is worth $27 billion. And at that valuation, Rivian stock is an absolute steal.

Long-term, we believe high-quality EV stocks are great multi-year investments, since EVs are set to grow from ~10% of car sales today, to 50%-plus by 2030.

In the realm of high-quality EV plays, Rivian stock is one of our favorites. Why? Our multi-year bull thesis can be broken down into five main points:

For those five reasons, we believe Rivian projects as one of the largest producers of EV cars by 2030. That will render it one of the most valuable auto companies in the world by then.

Our “back-of-the-napkin” math indicates that Rivian could hit the million-deliveries-per-year milestone by the late 2020s. At a $70,000 average sales price, that implies total revenues of $70 billion. Assuming a similar margin profile as Tesla (TSLA) – 30% gross margins and 20% operating margins – that would lead to $14 billion in operating profits. That’s about $10 billion in net profits after taxes.

We think that Rivian stock has multiple catalysts that could spark a significant rebound in shares over the next year.

For starters, the stock is really cheap. Rivian stock is basically trading at just 1X its 2025 sales estimates. If the company executes on its growth roadmap over the next few years, the stock should fly higher.

Previously, that was a big “if.” Today, it no longer is. Rivian is meeting its revised delivery and production targets even in a bad market. That’s impressive, and it should re-inject investor confidence into the company’s ability to execute over the long run.

At a macro-level, we’re also noticing trends of improving EV production capacity globally. With China removing recent COVID-19 lockdowns, there’s buzz that global EV production will meaningfully accelerate over the next 12 months. That’s because China is home to 60% of the world’s EV battery manufacturing. Indeed, this is already happening. China’s manufacturing PMI readings have been steadily rebounding as of late. 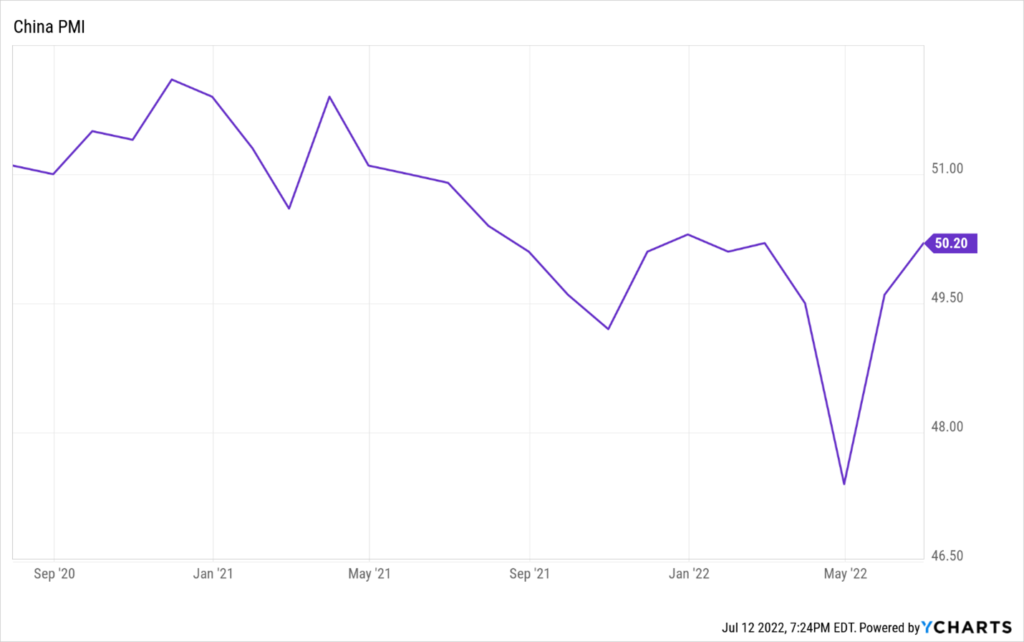 This rebound should help all EV stocks, Rivian included.

Industrial metal prices have been crashing recently, however. And we think this crash will persist. Although, in the second half of the year, EV stocks should perk up.

Overall, we think the whole EV industry is about to heat up in a big way. Rivian will dramatically and impressively ramp production against this improving macroeconomic backdrop, and on the heels of a huge stock price decline.

That’s a dangerous combination and implies huge gains ahead for Rivian stock.

That’s why we gave Innovation Investor subscribers the chance to buy the dip in Rivian stock.

The Final Word on Rivian Stock

We love Rivian stock as a long-term investment opportunity.