My headline today is about three disaster stocks to buy. To most, this sounds like it would be about the debacles in Unity (NASDAQ:U), Coinbase (NASDAQ:COIN) or SoFi (NYSE:SOFI). All of which would be worthy of inclusion, but not today. The current investment environment is not forgiving, so the damages extended to the highest ranks in stock quality. Therefore, investors must stick to basics to avoid blow out disastrous losses.

This means that it is better to deploy risk where there are fewest potential surprises or complications. Currently, we have plenty of disastrous headlines and on so many fronts. There is no need to add more drama from intrinsic equity reasons. The ongoing war in Ukraine and the Federal Reserve’s (far less violent) war on inflation have rocked even solid stocks, let alone the newer ones.

The indices have been correcting relentlessly and indiscriminately for a while. As a result investors shed stocks they shouldn’t have. Today we offer a short list of three of those disaster stocks to buy, but with caveats. When attempting to catch falling knives in a correction, I insist on a few rules. mainly I raise the quality standard to make it harder for stocks to qualify.

I only pick the best of the best, so my list contains only mega-caps. Doing so would eliminate as many question marks as possible. Don’t get me wrong, I like the prospects of COIN stock, maybe even Upstart (NASDAQ:UPST), but I don’t need the extra speculation that comes with them. Conversely, stocks like Apple (NASDAQ:AAPL) will be up if the markets are up. 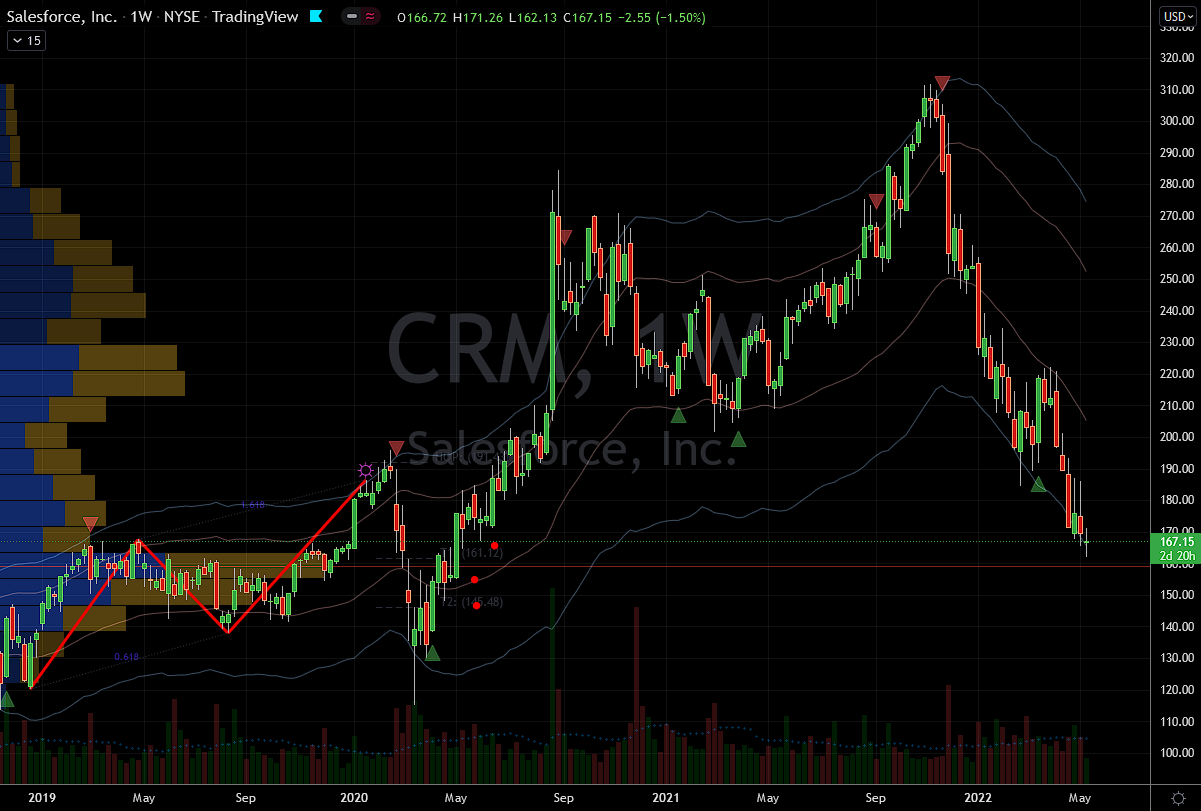 Salesforce (NYSE:CRM) There is no doubt that ‘the cloud’ changed the way the world conducts business. For that we have Salesforce to thank since they invented it over a decade ago. They made it cool and imperative for businesses to operate from the cloud. CRM stock investors are enjoying a 4,000% return if they stuck with it from the start.

Sadly, for the more recent investor, things could be better. CRM has lost almost half its value since last fall, and it is still having a hard time finding footing. This is not from the lack of effort, since management has executed flawlessly on plans. Revenues are now 2.5 times those from just five years ago. Clearly they know how to deliver results judging by these facts. The closer it gets to $150 per share the more buyers it is likely to find.

Wall Street currently has little appetite for risk, and CRM is expensive. However, the traditional metrics do not do it justice. The price-to-sales (P/S) of 6 is reasonable, it is even cheaper than Apple. Therefore it’s fair to say that CRM owners have realistic expectations. As such, they will be harder to disappoint. Investors should feel comfortable with starter positions, but not all in. It can still fall further in spite of the support present. 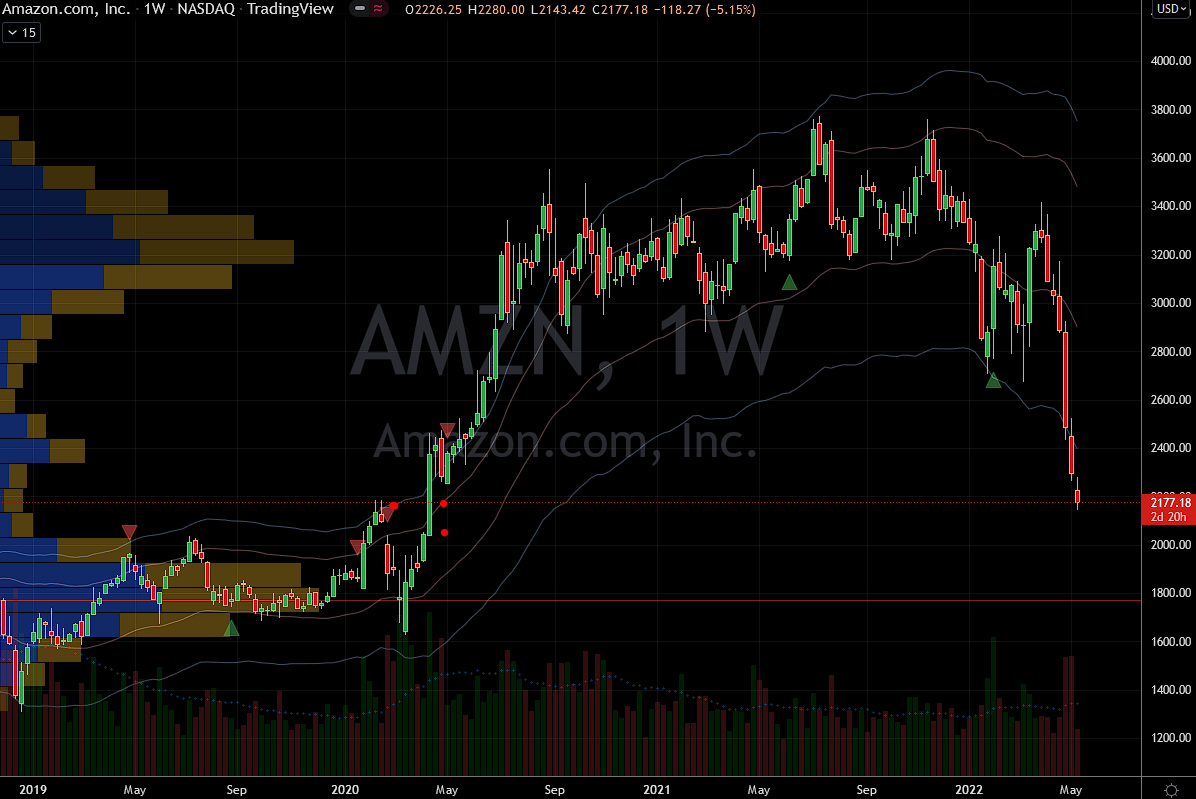 My second of three disaster stocks to buy today is perhaps my favorite of all time. Like CRM, Amazon (NASDAQ:AMZN) also changed the world but on a different level. It has gone so far past its humble book-selling original goals, and it is hard to describe. It touches my life daily and I don’t mean just from an online retailer perspective.

Salesforce may have invented the cloud, but AMZN actually built it to a global scale. Under the leadership of Jeff Bezos they broke many rules. Along the way Wall Street critics fought them tooth and nail. In the end AMZN prevailed and changed the world in the process. The major complaint for over a decade was about excessive spending. It turns out that they needed to spend to create magic.

Today “value” is my selling point. AMZN’s price-to-sales is as its lowest in at least seven years. On that front, its P/S is half as much as Apple’s. Even though that doesn’t guarantee me upside profits, it does suggest the lack of froth. Investors into AMZN stock at these levels have realistic expectations, so they will not disappoint easily. 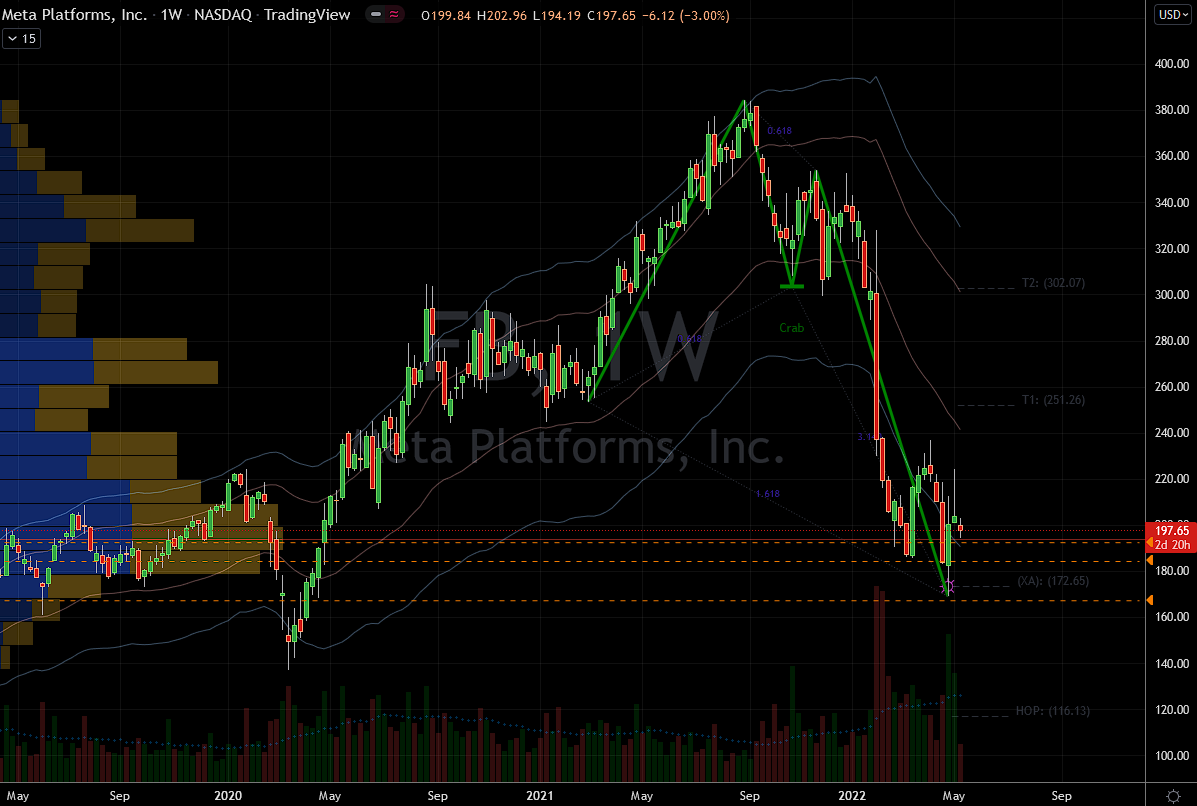 Our third disaster stock to buy is Meta Platforms (NASDAQ:FB), which is another game changer. Not many companies can tout having over three billion monthly active users. Facebook is the dominant social media platform company, and it is about to pivot. We now know that they intend to change the game again with their migration into the Metaverse. They even changed their company name to rebrand to suit.

So far, social media literally changed how people interact. The younger generations will have almost nothing in common with their parents. This next move will draw even harder lines, and we’re not yet clear if it is a good thing. Meanwhile, FB will likely have the first mover advantage and profit a ton from it. Not only doesn’t it have the head-start, but also the scale. If they execute well, the herd will relocate into the Metaverse.

Even though at $530 billion Meta stock is no longer a giga-cap, its financial metrics are still monstrous. Management delivered $120 billion in sales, $96 billion in gross profit and $37 billion of net income. Last year they also created $58 billion in cash from operations. There are no weak points here, and I don’t care what the experts think. FB stock is one to hold for as long there is upside in the equity markets.