Tilray (NASDAQ:TLRY) stock is once again on its back foot on Wall Street. This is through no fault of its own, because the same woes plague the whole cannabis cohort. Pot stocks are still swimming upstream because of legal hindrances. I’ve covered this topic from many different angles, so today I will make it mostly about technical confirmation. First, I will quickly glance over the fundamental reasons to still believe in the success of TLRY stock.

The cannabis industry is still in its infancy. In fact, you could even say it’s still in the womb, because the U.S. still considers it an illegal business.

Some states have opened the door, but the White House is dragging its feet. Over the long term, the businesses that are trendsetters now will become stronger.

They are working extremely hard against many unnecessary obstacles. Eventually they will be free to pursue their plans without legal worry. Meanwhile, the charts can help us navigate the short-term gyrations.

While timing entries into pot stocks is tricky business, we can avoid mistakes. 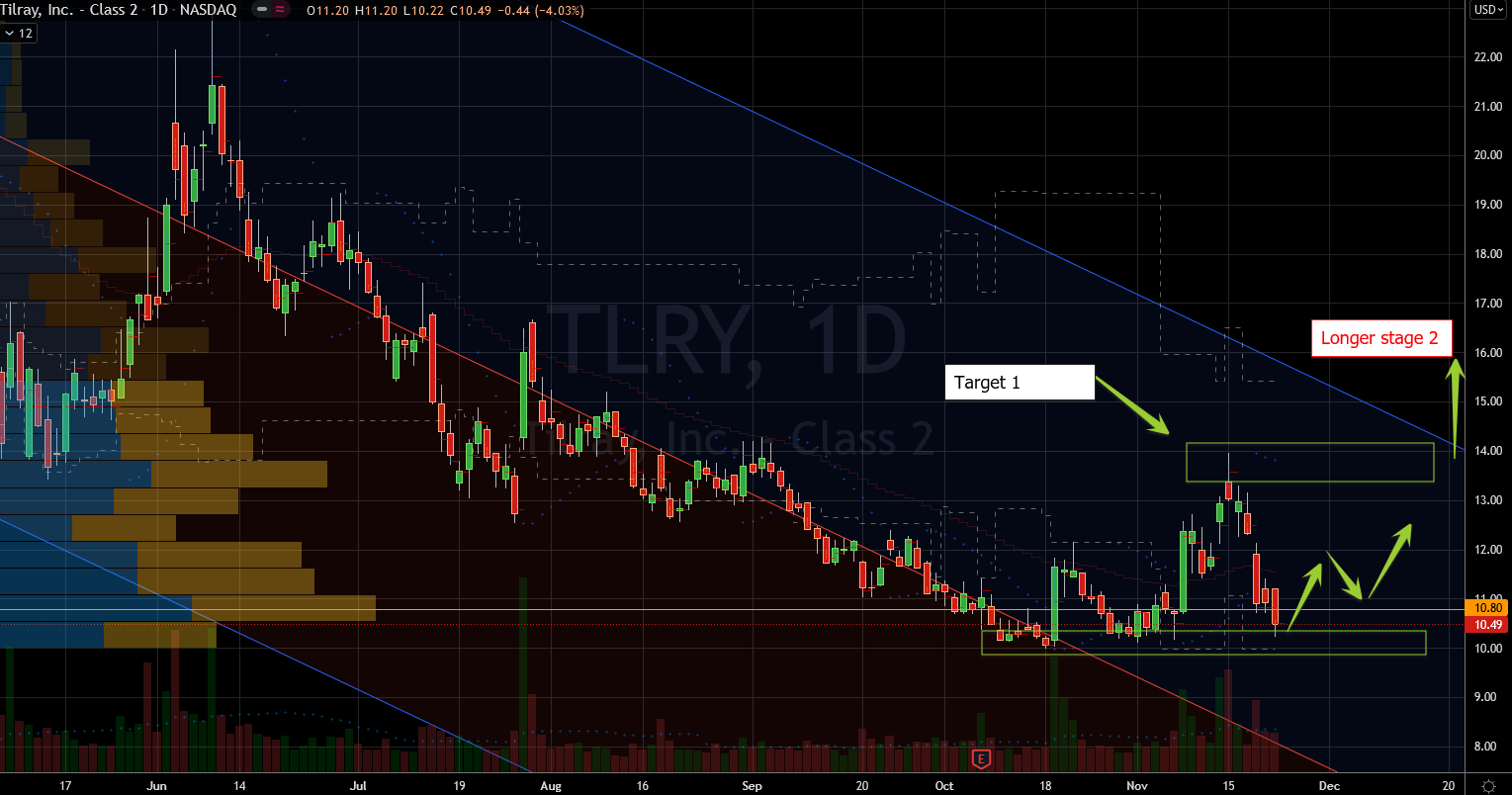 About a month ago, I wrote an article suggesting that TLRY stock would revert higher. That outcome transpired quickly as it mounted a 30% rally almost immediately. Exactly a month after my article that party ended and it has since given back 25%.

Well this is the point where I would rinse and repeat the same strategy that worked a month ago. The good news is that it failed at a predictable level. I would have expected resistance near $14 per share. That’s the level from which it fell apart in September. When stocks recover to prior accident scenes, they often find sellers.

The dip from there was a bit larger than ideal. Therefore, my statement on TLRY stock now is the same as a month ago. The likelihood of more upside potential in the long run, outweighs the downside risk. Shorter term, I expect it to find footing falling into $10.

However, if this support fails, the bears could extend the pain a bit further.

Have Some Patience in the Long Run

Therefore, investors should be cautious deploying new risk. If you’re already long Tilray stock, you shouldn’t add any more. This is especially true if you’re sitting on losses. Doing so means that you would be making your problems bigger. Averaging down is a bad habit in my book. I can see it working in very rare scenarios; otherwise, it creates further complications.

So, the technical fast trader setup for TLRY now is to get long but with tight stops. My assumption is that it will hold support. However, if it fails, then you should stop out. Conversely, the investor setup would suggest to nibble here for the long term, and ignore it for months.

Fundamentally, the valuations for cannabis stocks have normalized. They now make more sense than when they were a hot topic on Wall Street. Statistically, Tilray stock now has a price-to-sales of 15x. This is about 10 times cheaper than when it was in its heyday. Remember that TLRY was the original super-spiker, even before GameStop (NYSE:GME) was on the radar. It spiked to $300 at blinding speeds. That short squeeze was epic, and I was trading it back then.

Since then, management proved itself competent judging by how they are a dominant player now. I used to favor Canopy Growth (NASDAQ:CGC), but now I default to TLRY.

My conviction level with Tilray is medium at best because of the entire setup on Wall Street. It’s never a good idea to take an all-in position in stocks when the indices have never been higher. Tilray does not trade in a vacuum, so it needs a bullish market to rally.