The lockdowns have not been part of the conversation for a long while. They are resurfacing now as we heard rumblings last week. Last year, the pandemic forced the whole world into a giant halt. That decimated the profit-and-loss statements of millions of businesses. Nevertheless, even back then there were stocks to buy on the dips. Our mission today is to find a few good ones going into the holidays.

The businesses that thrived last year were mostly mega-caps. Currently there are some of those that have lost large portions of froth in their stocks. These make for a fine collection of stocks to buy even when there is threat of more macroeconomic downside.

It was clear from the crisis that governments have tremendous commitment to reflating the economies. The U.S. pulled out all stops with trillions of dollars thrown at the problem. Evidence of this is the level of inflation now. Therefore, my assumption is that we are highly unlikely to repeat the cause of the problem.

The politicians this time around will not be quick to reset the stay-at-home order. We have since learned a lot about the virus. More importantly, we have remedies for it. Although we don’t have a cure, we do have many effective vaccines and the promise of easier treatments. Pfizer (NYSE:PFE) and Merck (NYSE:MRK) promised us treatment pills.

If we assume that we are not likely to lockdown, then the bulls are in charge. The Federal Reserve already announced its tapering process for the next three months. This will make it very likely that we will have the QE extend beyond next summer. There were rumblings of aggressive rate hikes, but I would bet against those.

If at all, we might have one token raise next year unless something new comes up. The overseas bonds still carry negative yields, therefore the bid for the U.S. Treasurys will remain strong. In that environment, it is highly unlikely that the Fed will raise rates. Something will have to force its hand to do that.

I’ve heard people use the term “hyperinflation” in their discussions of the U.S. situation. With all due respect, those who bring it up haven’t seen real inflation. Ask the folks in Lebanon, who can attest to what it feels like to have gasoline prices quadruple overnight.

In the United States things are more expensive, but it’s not stopping people from buying them. Inflation only becomes a problem when it crimps spending. The U.S. consumers are spending at record pace. Moreover, that segment is two-thirds of the economy.

This is an environment where investors should be looking for stocks to buy, not short. Today’s three are prior champions that have fallen out of favor in an aggressive way. None of them have systemic problems that have caused their woes. They are: 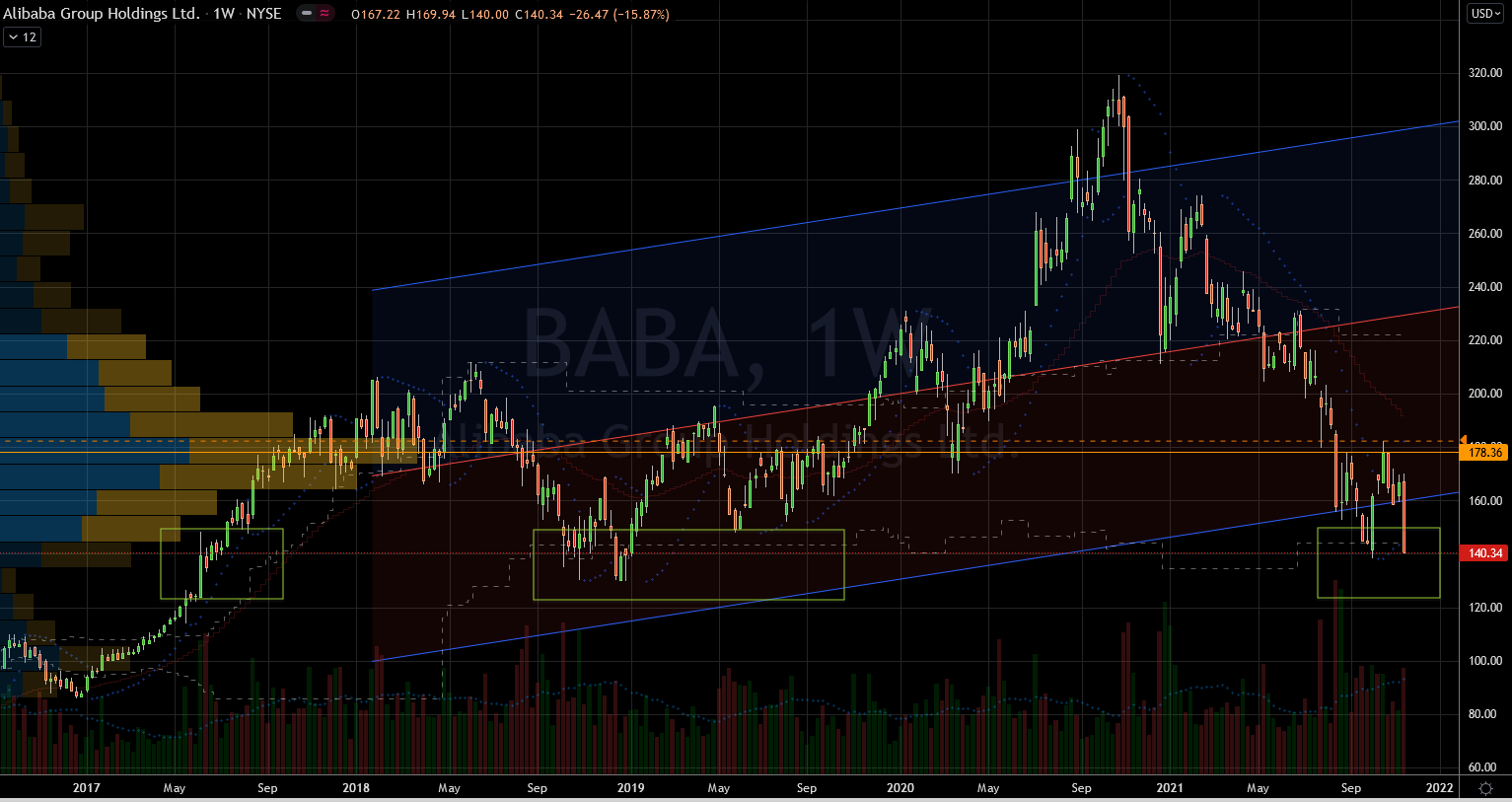 We all know already about the plight of BABA stock. The government waged war against its largest, more successful businesses. They want to minimize monopolistic behaviors there. As a result, BABA stock has lost more 55% of its value in about a year. Conversely, its business is still growing at a healthy clip.

Management has more than doubled its revenues in three years. Their gross income is 50% bigger than 2019. And most importantly that income is still strong in spite of the recent complications. These are not statistics of a struggling business. Quite the opposite.

In fact, its success may be the cause of the slide in the stock price. It has become a target for the authorities to try and stifle. Alibaba just delivered more than $100 billion in revenues in one day from their singles event on 11/11. They muted the headlines around it perhaps on purpose. They also downplayed their success with their earnings message. I would do the same if the authorities were breathing down my neck about my success.

This is all to say that the business is fine and that this too shall pass. There is also current technical support from the charts. The zone just below current price has recently served as a base. But if it fails, it could trigger another leg lower to $110 per share.

BABA stock here or lower is a bargain by any metric. Unless the Chinese government is intent on demolishing the company, this is definitely on my list of stocks to buy. Since the indices are at risk overall, I should leave room for doubt – just in case. 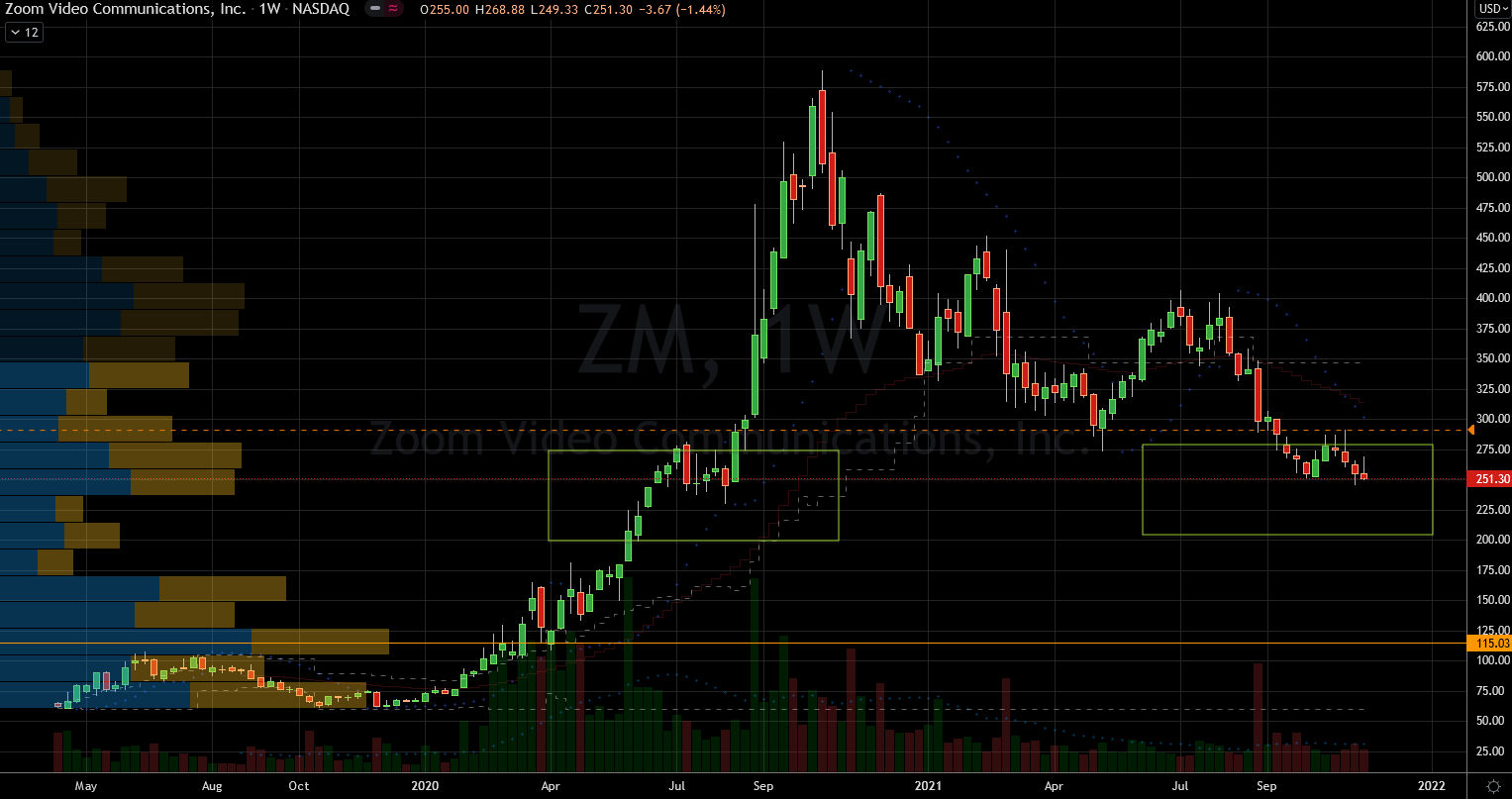 Our second pick today benefits from the idea of lockdowns. Consider this a hedge on the other two in case those headlines gather steam. Regardless of new restrictions, the behavior of “zooming” has not turned out to be a fad. We continue to use its services even though people are going back to work. I zoom on a weekly basis for business. My family zooms almost every day on a personal level.

Zoom services just makes sense, so we are not going to ditch it soon. We are driving less and telecommuting more. Also, business meetings are now totally acceptable over a video connection. ZM metrics continues to grow at an aggressive pace. The drop in ZM stock price is astonishing given the reports its delivering.

Speaking of which, it will have another earnings event soon. Onus is on management to paint a trouble-free picture. It is not likely for them to be overly aggressive since investor sentiment soured a bit. Furthermore, they do have the cover of potential lockdown headlines. Management may want to under-promise to they can over-deliver next report.

The financial metrics have improved drastically for ZM stock. The price-to-sales, for example, dropped 100 points all the way down to 21. This is an absolute bargain relative to where it was last year. This can only happen when management executes on its plans and doesn’t squander an opportunity.

They had a huge spike in usage during the pandemic. However, they made the most of it and then some. They currently have a 12-month revenue rate of $3.6 billion. More importantly they also have $1 billion in net income. Signs point to the success of ZM stock in the long run. Therefor, this absolutely belongs on the list of stocks to buy. 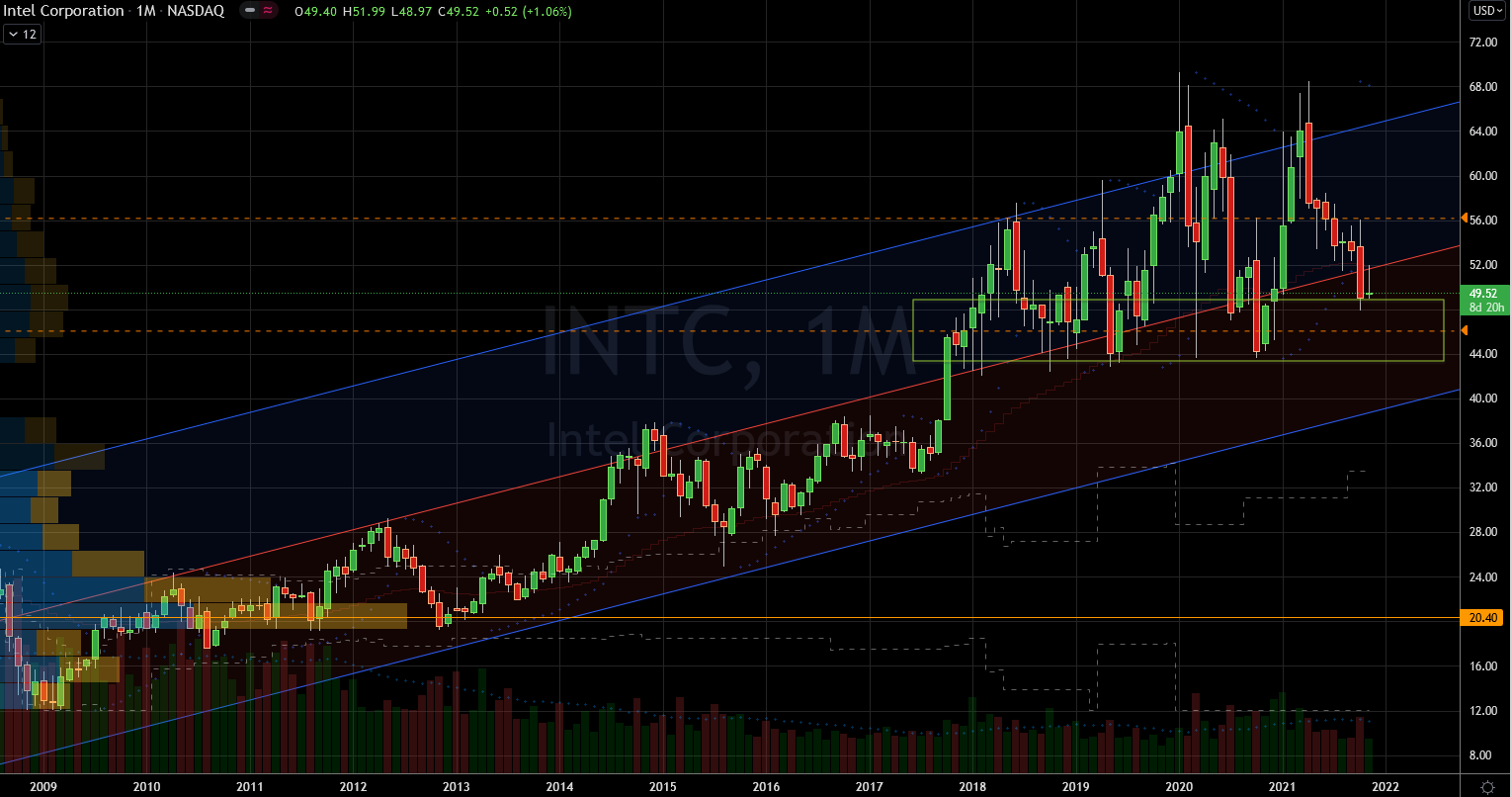 Our third stock to buy today is Intel. Unlike the other two, it hasn’t been on a recent downward trend. INTC stock has been trading sideways for three years. It fell behind in the race for headlines while Advanced Micro Devices (NASDAQ:AMD) and Nvidia (NASDAQ:NVDA) hogged them.

Investors forgot about Intel, yet it is the actual beast in the sector. It produces more revenue, gross profit and net income twice more than the other two combined. Eventually it will matter again and investors will flock to its stock.

The demand on chips is only going to increase exponentially. The digitization revolution is not a fad, it is a long-term trend where tech will beget tech. We will need all suppliers to contribute, and this is the biggest one. Management needs to better focus investor attention on its strengths.

INTC stock is out of favor, but that is not going to last forever. Statistically, this is the absolutely cheapest stock in the chip sector. This makes it a dormant giant stock that could wake up within the next six months. I recently had the good fortune of catching a breakout. I will re-engage long from around this base.

It is important to reemphasize that strong conviction is a threat to financial health. It sounds great, but stocks do not trade in a vacuum. The indices just broke records, so they are susceptible for hiccups. Those would drag down all stocks, including these three.