One of the most interesting “smart money” trades we came across yesterday was with Microsoft Corporation (NASDAQ: MSFT).

If you’re new here, a “smart money” trade is a relatively large volume option trade most likely made by a pro trader. The idea is to analyze unusual options activity, identify an interesting “smart money” trade, and then make our best guess as to:

If we like what we see after putting all these pieces together, we can mimic the “smart money” trade (on a smaller scale), and potentially ride alongside our pro trader to profits. With all this in mind…

Interestingly, there seem to be multiple option trades done for MSFT yesterday, for the same strike price and expiration date, with the total amount translating to multi-million dollars.

On analyzing the daily chart of MSFT, the stock seems to have broken out of a flag pattern (marked as red color lines). This breakout level would now act as a strong support area. The stock is also trading above gap support, which is marked as a blue color dotted line. All this makes it likely that our pro trader is bullish on MSFT. 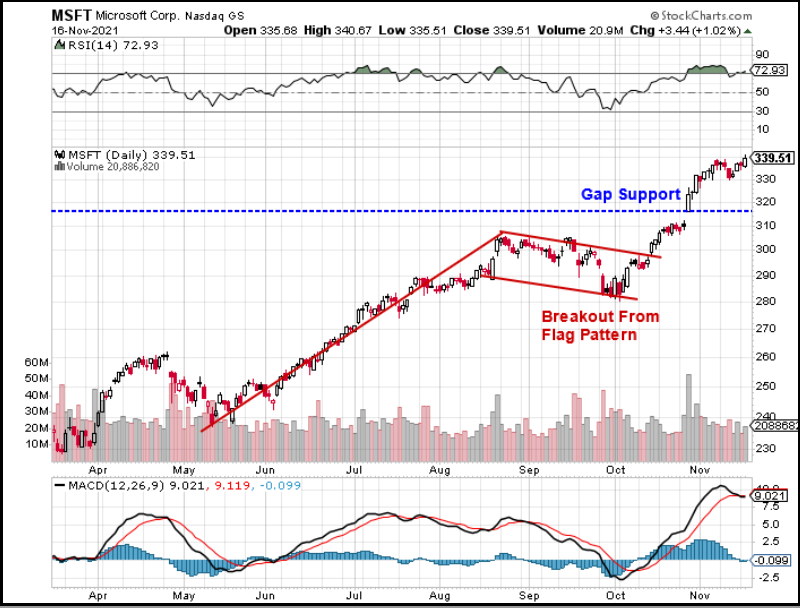 This lends credence to our conclusion that the pro bought these call options, as opposed to selling them.

If you agree and would like to mimic this trade, here’s how:

As always, depending on your risk appetite, do remember to set a stop-loss for the options trade to avoid significant losses.

— Trades of The Day Research Team