I first came in contact with Palantir (NYSE:PLTR) stock earlier this year and immediately knew it was something special. The underlying bullish thesis was clear, so I traded it successfully in the past few months. The easiest opportunities came when it fell in sympathy to other small-cap stocks.

The problem with it is that it is temporarily part of the Reddit cohort of stocks. That’s a “problem” because Palantir has fundamentals that are near bulletproof.

The company doesn’t need to be moving with others stocks — meme stocks — that have far more questionable scenarios. PLTR stock does not deserve to rally this fast in both directions.

I was lucky enough to be long it when it spiked with the GameStop (NYSE:GME) storm in February. It almost hit $46 per share, then came crashing down too fast. Those who didn’t book profits at the top had a nasty reversal on their hands.

Since then it has continued to whipsaw violently, but in a tighter range. This opened the door for actively trading it for profit. The plan was simple: Buy the dips and sell the rips.

Some of the easiest wins have come from selling puts on bad days under $20 per share. These are bullish positions that leave room for error.

PLTR Stock Will Be Up If Markets Are Up 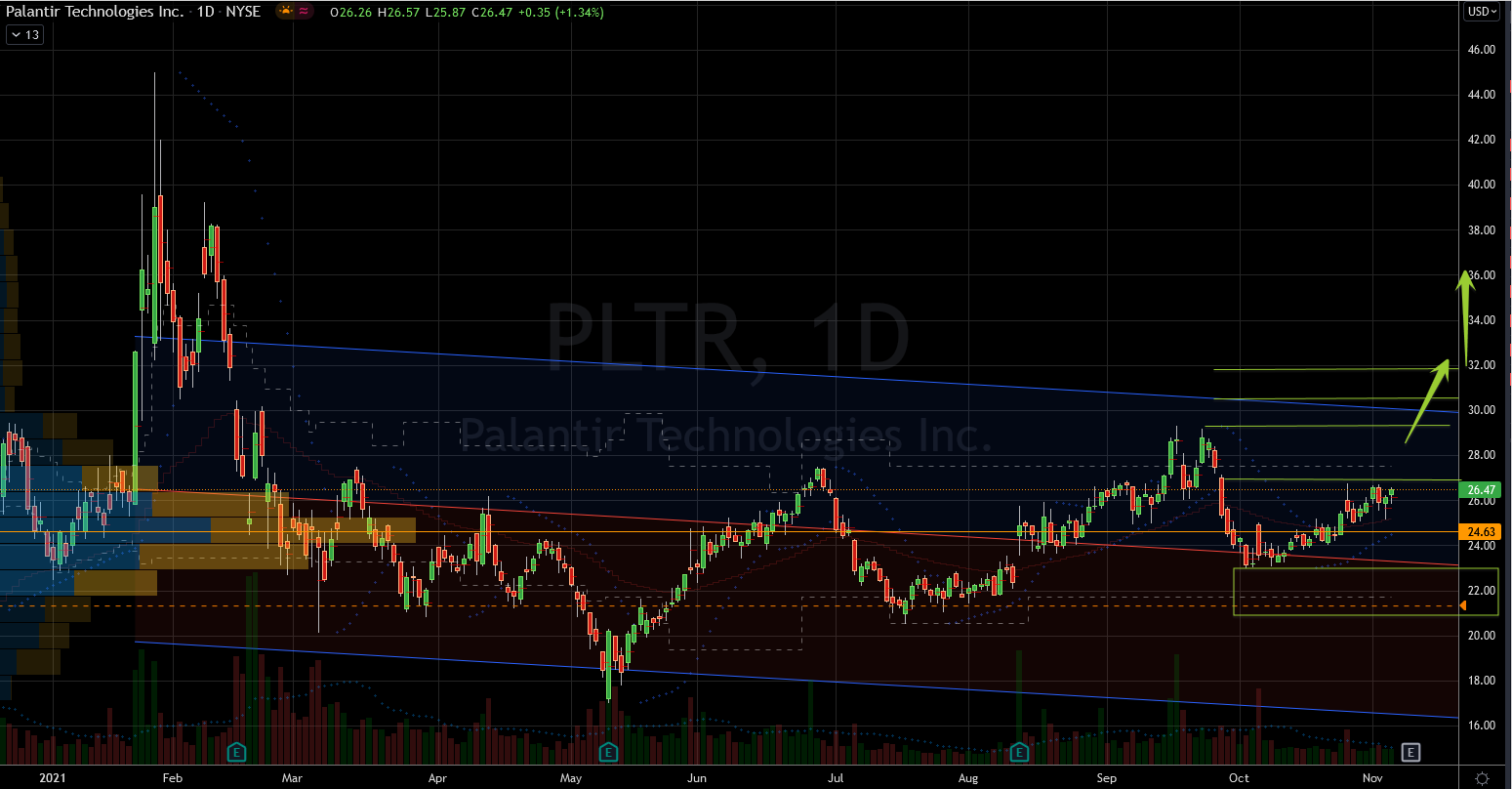 In the long run, I am confident that if the stock markets are higher, than so is Palantir. It it important to note that shorter term, I am not a perma-bull.

I have been realistic about the levels where it has resistance. For example I stopped my friends from chasing it in September near $30 per share. Sure enough, it failed and corrected 20% during the September market-wide spat.

Since then PLTR stock found footing and rallied back 17%. Are you dizzy yet? It gets better because I expect the bulls to eventually go above $30. And when they do that, they go for another 20% from there.

Meanwhile, the short-term strategy remains to trade the range until one of the sides fails.

I anticipate that for the foreseeable future, PLTR stock has support near $22 per share. If that fails, then much stronger buyers would step in below $20 … including me. Looking up, there are at least three levels of resistance (see chart). But once past them, the bulls will likely reach $36 per share.

Buy and Hold Will Work for Patient Investors
The fundamentals suggest that it’s probably easiest to just buy the stock and hold it for the long term. The company already has a revenue rate of $1.4 billion. Management recently secured a contract guaranteeing them a 25% increase.

In short, there’s absolutely nothing wrong with the fundamentals, and the team seems capable. They are in the right business and at the right time. Artificial intelligence (AI) has become an absolute necessity for all businesses. Up until last year, AI was more of a novelty.

Since the pandemic, the rate of data collection has expanded tremendously. The people can no longer make use of it efficiently to be effective. We will need the help of machines to act on all the bits of information we collect.

Palantir delivers a setup that empowers users to make decisions on the fly. Moreover, they have two lines of business, one commercial and the other with the government. We all know how much those folks love to overpay for stuff.

The future is bright for this company and it will be in the lead pack of the stock market. IBM (NYSE:IBM) would learn a thing or two on how to implement a strategy. They’ve been trying to do this AI thing for decades.