The jitters that plagued Wall Street in September are finally abating. As a result, equity prices are at or near record levels. The negative rhetoric was wrong, as we’ve been writing all along, so our strategy of finding stocks to buy was correct.

Investors could let their winners run, but not indiscriminately. This is the biggest reporting week of the season. Most of the giga-cap stocks will announce their scorecards. I am absolutely certain that they will be blockbuster numbers. Unfortunately, we can’t know what the reaction will be like on the headlines.

The short term price action on the morning of a company’s earnings is always binary. Not even the CEO of that company could tell us which way it’s going to go. The investor reactions will be largely because of their expectations coming into it.

Case in point? Look at what happened to Snapchat (NYSE:SNAP) last week. Management crushed performance metrics from last year, yet the stock fell 25%. The reason was because they missed estimates by a small percent. Investors chose to ignore the fact that they grew all other user and financial metrics. Investor expectations were too high so they punished the stock.

Today’s write up is to set trades that could still work knowing this short term gambling factor. Our largest tech companies fell off a Cliff in sympathy with Snapchat last week. For example Facebook (NASDAQ:FB), and Alphabet (NASDAQ:GOOGL,NASDAQ:GOOG) suffered heavy losses. These are two perfect examples of stocks that are healthy in the long term. However, they are both suffering from different headlines that are immaterial to their own operations. These two make for great stocks to buy even into short term events.

Not all earnings reactions were disappointing. Tesla (NASDAQ:TSLA) delivered an excellent scorecard and investors rewarded it with a new all time high print. This came after an already 60% four months long rally. Arguably this is a risky stock, so it speaks to the strength of the risk appetite on Wall Street. Clearly there are willing buyers out there, so investors should not run and hide into the earnings season.

The three stocks to buy into earnings are:

The September dip was violent enough that it may have shaken out all enough weak hands. This leaves a stronger base of buyers that will defend the equities going into Christmas. Since these are trades, I would treat them as speculative bets and keep the size appropriate. 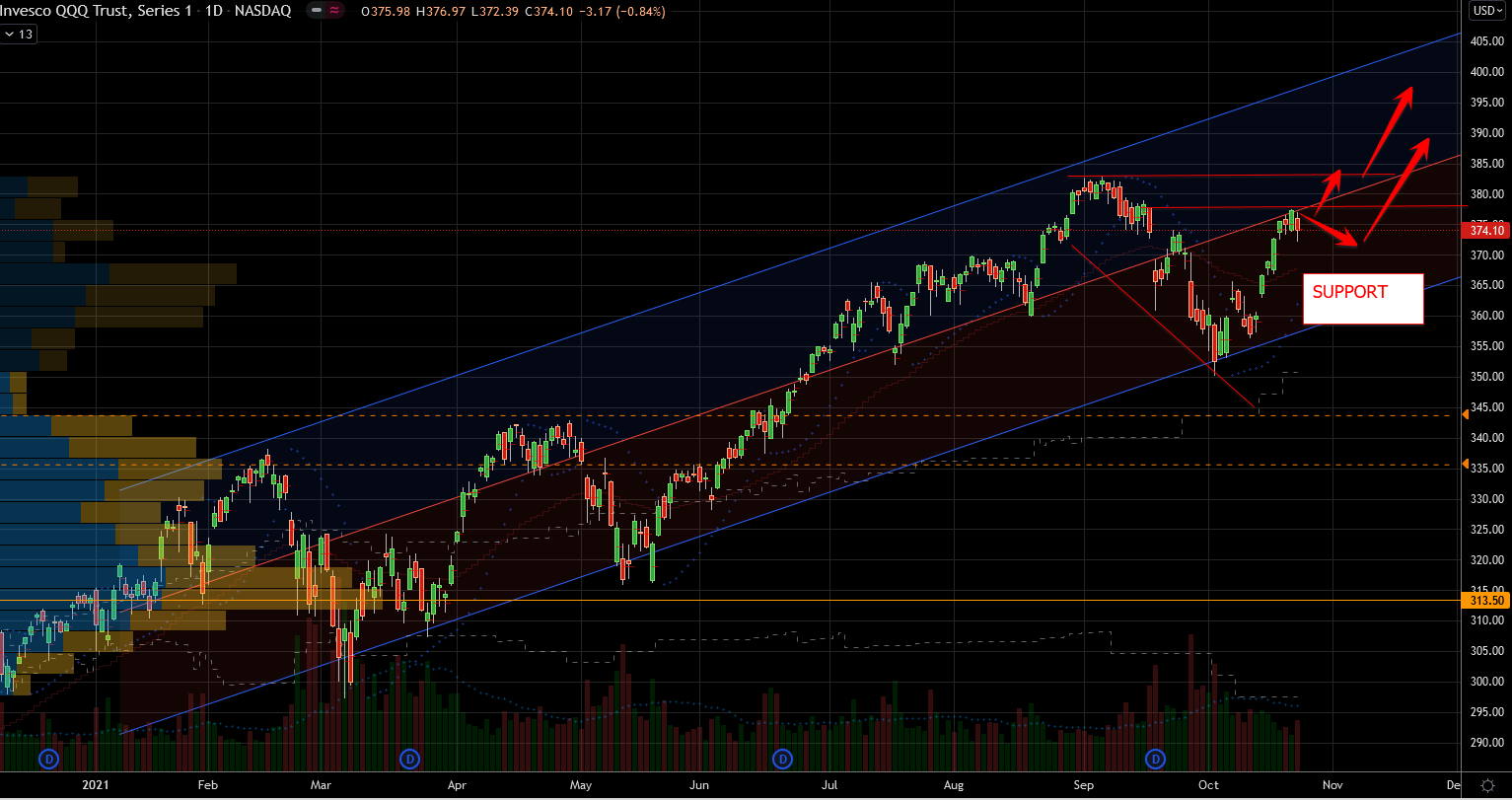 Buying into stocks ahead of their earnings reports carries unnecessary short term risk. During earnings season, investors react to sentiment rather than facts and figures. As a result, stocks fall temporarily through no fault of their own. Especially when prices are near or at all time highs, Wall Street tends to get too far ahead of itself. Management teams across the market currently have a high bar that they need to overcome to impress investors.

My thesis for QQQ today is that Invesco is going to breakout. This could happen off an immediate earnings week pop. But even if they drop, the buyers will step in and retry into next week. Clearly this is a trade with a binary flare.

It is convenient to get long on stocks that come without individual headline risk. This week, investors can throw a blanket trade over the entire NASDAQ. By using QQQ stock, investors would bet on the collective instead of trying to find individual stocks to buy. This eliminates the need for singularly guessing on earnings. Moreover, it diffuses the risk of a disappointing quarter from one team.

Back in late August, I suggested buying QQQ stock, which delivered instantaneous results. Since then it has pivoted around those levels three times, which normally establishes a base.

If QQQ stock can hold above $365 per share, Invesco can break into record levels once more. This should work out even if there is a negative knee jerk reaction to some of the megacap earnings this week. 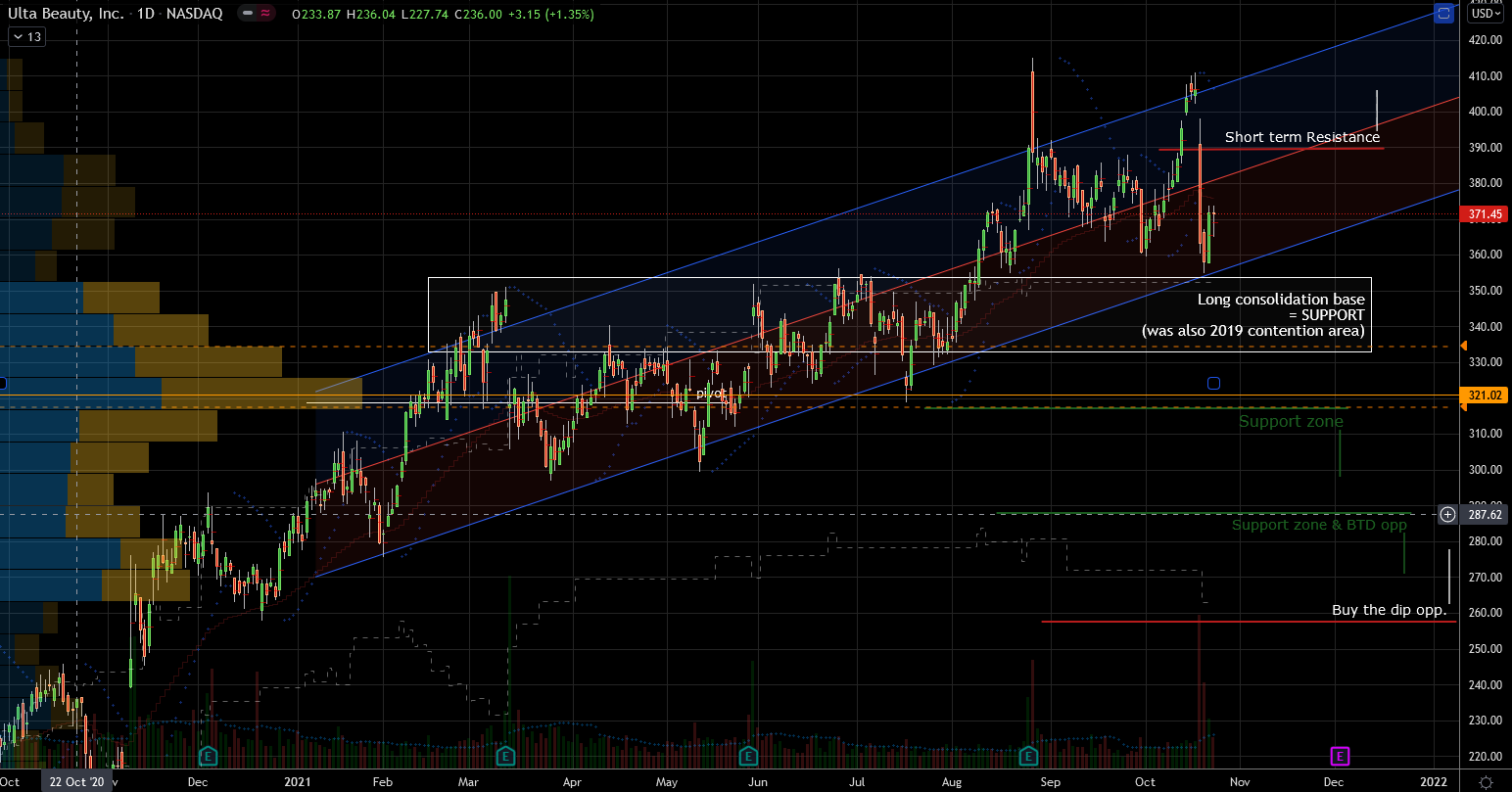 Luckily investors found footing after a few months of consolidation. They then went on an equally impressive rally and broke new highs.

Unfortunately, ULTA stock had a calamity even before the pandemic. The stock fell apart 40% before it found a base.

Then 2020 happened, and we all know how that turned out for the retail sector. By mid-March of last year, Ulta had fallen back to its 2015 start. The major correction was an unbelievable opportunity for the brave to jump in.

Getting in now seems a bit late from an investment perspective. However, there is a short-term trade off the base below that the bulls can use for a Christmas rally. This is a stock that we know can surprise the bears. I’m sure there were a lot of losses among shortsellers due to the 230% rally after pandemic lows.

The goal here is to get long for a midterm swing, but stop out if the base gives way. Recently, Ulta stock consolidated for three months just under $355 per share. Last week it bounced off that level and therein lies the opportunity. I realize that there will be a lot of resistance above; the drop from $400 per share was sharp and unforgiving, which shows that there are heavy sellers lurking above.

Therefore I consider this a trade not an investment in the company. There are a lot of support levels even below the current base we’re using today. But when the indices are at all time highs the proper sentiment is cautious optimism. 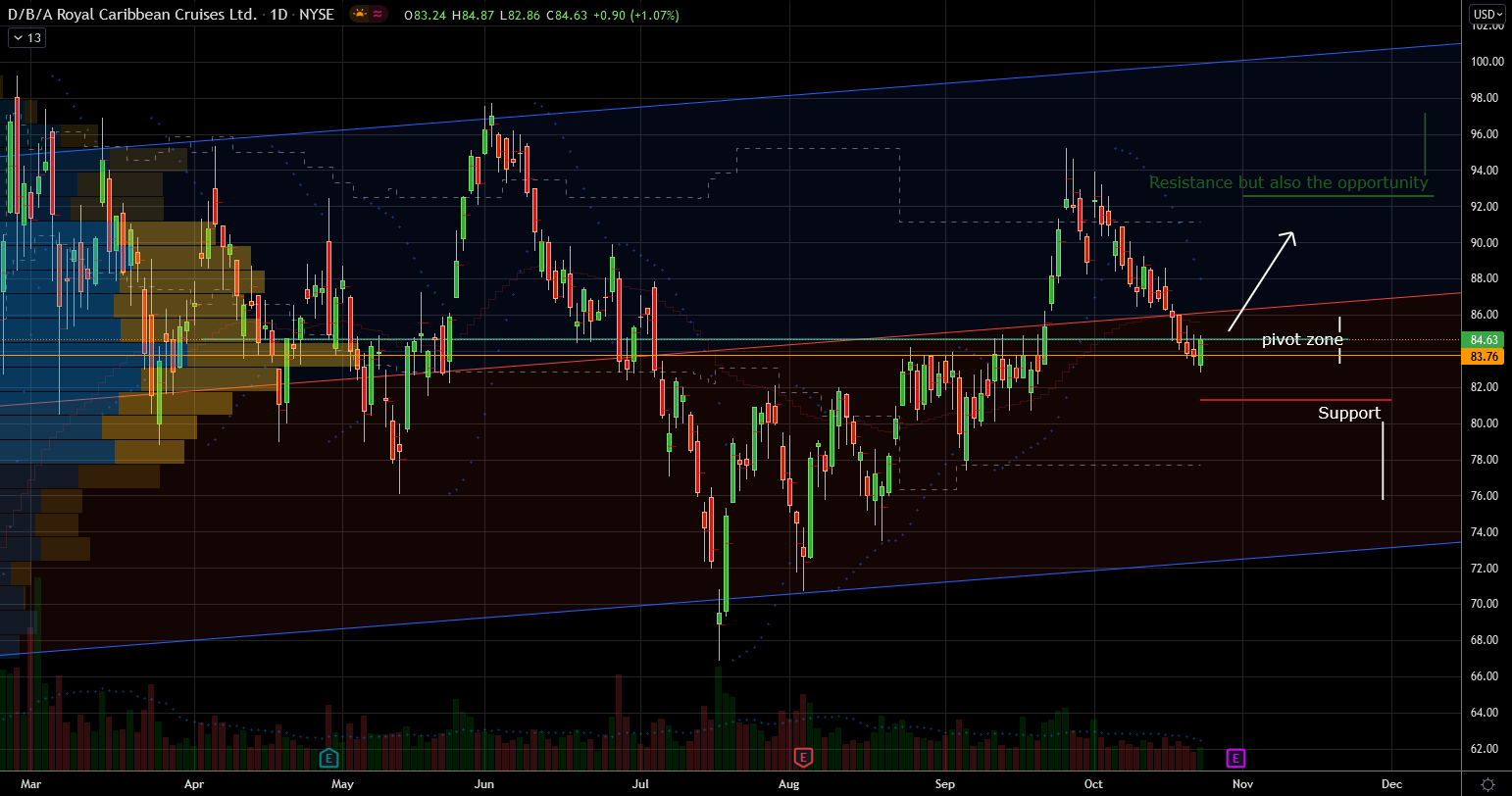 The October correction cost RCL stock investors almost 15%. However the stock is now falling to a potential support level. And when a stock falls into prior pivots, it tends to find buyers. Late September, RCL spiked 15% and this dip will bring it back full circle to the starting point. This is where new traders should try their luck. Upcoming earnings could present a surprise and temporary curve ball for the opportunity.

Consequently, I consider this entry one of two. On the off chance the sellers want to punish it some more, I must leave room to add lower. The lower end of RCL’s 6 months old channel extends to $73 per share. Getting long now means anticipating it will do better this time.

Just in case it doesn’t, it would be prudent to take only half a position then add later. If the dip comes then the cost basis is even stronger. If the bounce happens sooner, then we are already long and can add to a winning trade.