Corsair Gaming (NASDAQ:CRSR) reported earnings early August and the stock fell 10%. The negative reaction to the report had more to do with wrong expectations than structural issues. CRSR stock rallied back 12% to recover the neckline from the headline plunge.

Those who caught the falling knife benefited from a quick win. Unfortunately, it faded once more but is holding the prior low. If the indices hold up, there should be another rally brewing near term off it.

CRSR stock had two strong rallies off appears to be a solid base. This shows that Wall Street is uncertain about it, so they overreact in both directions. From here, it makes sense to rely only on the facts of the matter. This way traders would reduce the amount of guessing when dealing with it.

The bottom from the last two months action has acted as a strong springboard. Furthermore, the buyers stalled almost exactly at $30 per share. These two facts suggest a trade-able range with finite upside and downside limits. These can guide traders for the next few weeks. The action is likely to ping-pong between the two limits. 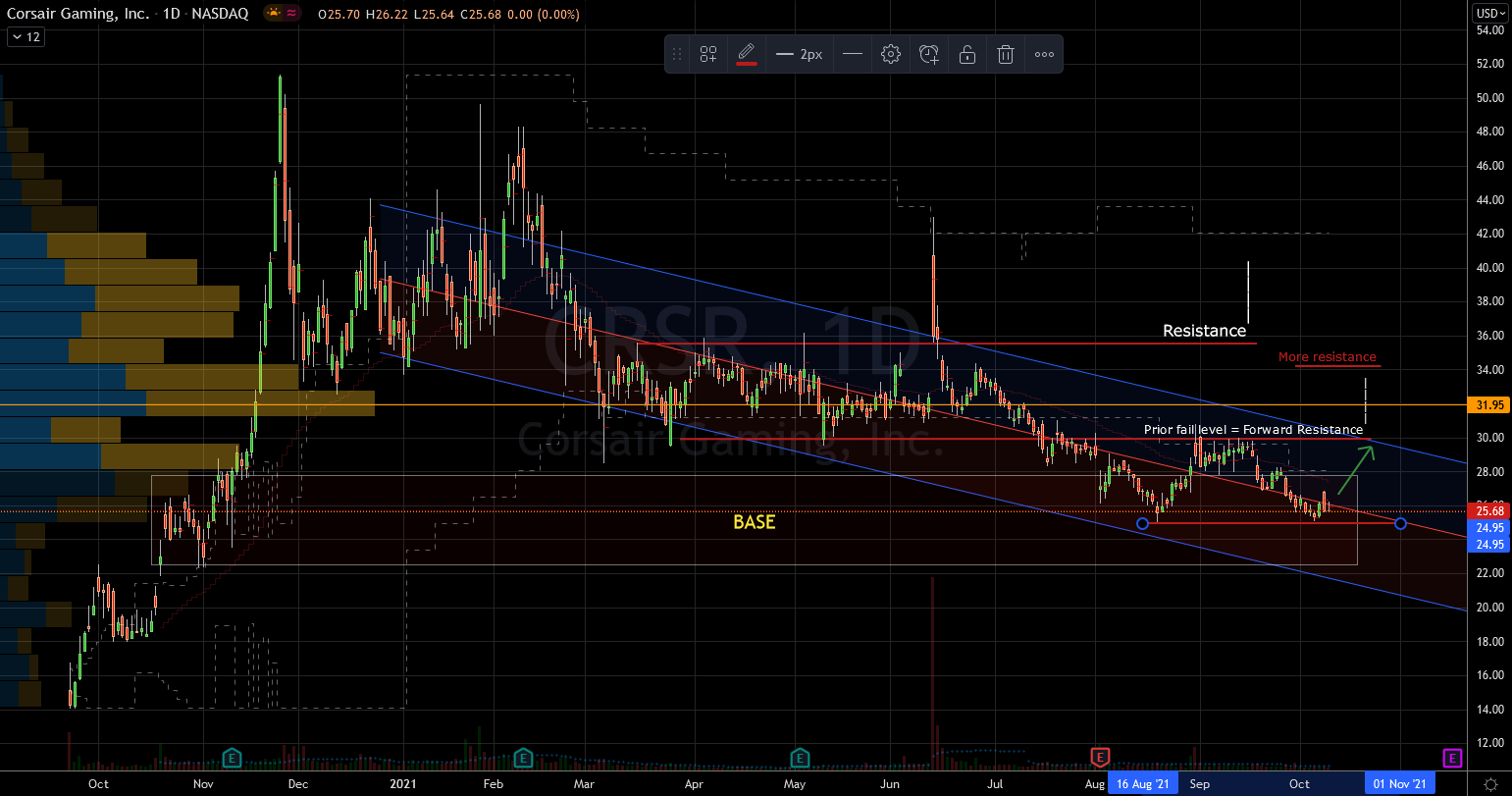 There are buyers lurking going into the $25 support. As there are a bunch of sellers waiting at $30 per share. Somewhere in the middle lies the demarcation zone for this short-term battlefield. Eventually when one side fails, the action will carry in that direction. In a bullish market, this should be upward, not down. If support fails, short-term traders would likely stop out and retry lower.

So far, these comments are for the benefit of the traders looking for swing trades. CRSR stock also makes for a fine long-term thesis for the more traditional buy-and-hold investors. In either cases, it would make sense to leave room for error. Conviction should be lower than normal, so it is wrong to take a full position at once.

The financials of CRSR suggest that the upside potential is more likely than downside risk. However, it does need the stock market in general to find footing from this ongoing malaise. Overall rhetoric on Wall Street has soured, and this week will be a tough test for that. The expectations are that this will be a negative week, so any upside surprise could help turn this thing around.

Traders should be aware that CRSR could fall another 10% if they lose the base. That’s not my forecast, but it is a technical scenario that exists close to current price. The bulls need to hold $25 to stave off a bearish short-term pattern. Even then it won’t matter much in the long run.

Meanwhile, nobody wants to start out a trade from a hole.

Rallies into $28 for share we’ll find sellers, and there will be battles $2 above it. The volume profile of CRSR shows that the bulls have their work cut out for them.

Therefore, investors need to be patient and expect a slower recovery rather than a V-shaped one. Sharp bounces often fade and create more volatility. These cause a lot of investors to avoid the stock completely.

Reasonable Valuation Is an Asset for CRSR Stock

Fundamentally CRSR stock is cheap. The pandemic work-from-home concept gave its revenues a boost. We all needed equipment and periphery, which played right into Corsair’s hands. Management earned kudos because they did not waste the opportunity. They not only doubled their revenues, but they now carry a $150 million net income yearly run rate.

Even though CRSR is up 70% in a year, the metrics don’t show an expensive stock. Its price-to-earnings ratio is still 16, and its price-to-sales is 1.3. Those are humble statistics that don’t substantiate a bearish scenario.

For now, it will go with the flow of the indices in general.

3 Oil Stocks to Buy Before the Bull Market Returns

Upgrades and Downgrades for Monday, 8/8