Stocks roared back on Tuesday with big gains across the board for the indices. In the case of the Nasdaq and Russell, they more than made up the losses from Monday. The Dow and S&P made up most of the losses, but not quite all of them.

All 10 main sectors moved higher on Tuesday with eight gaining at least 1.0%. The industrial sector was the top performer with a gain of 2.8% and it was followed by the financial sector with a rally of 2.48%.

With the big reversal from big losses to big gains, the scans flipped to a decidedly more positive result on Tuesday. There were 165 bullish signals generated and only 10 bearish signals.

The barometer jumped from 29.0 to 86.1 when the results were added in to the equation. The reading is the highest for the indicator since February 2.

With 165 bullish signals and only 10 bearish signals to choose from, it shouldn’t be a big surprise that today’s trade idea is a bullish one. The hardest thing was narrowing it down to one trade setup that I liked the best. Ultimately I felt like the fundamentals and chart for Enphase Energy (Nasdaq: ENPH) would give us the best odds of success. The company scores an EPS rating of 93 and an SMR rating of an A. 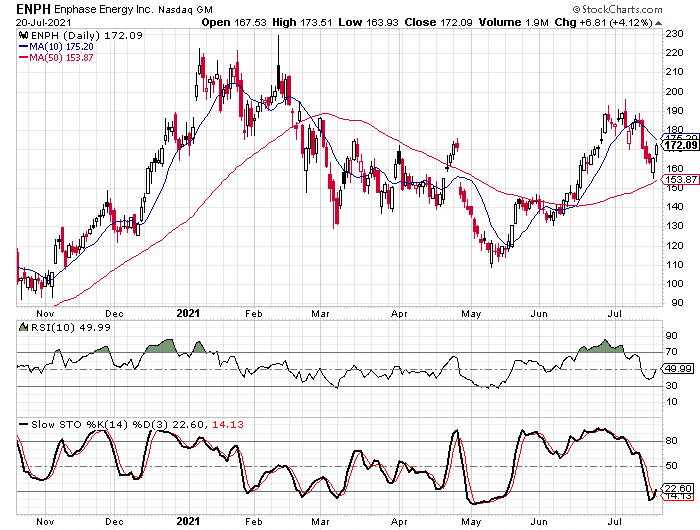 One of the things I liked best about the chart for Enphase was that the stock didn’t drop below the 50-day moving average over the last week. A great number of stocks did fall below their 50-day and those trend lines could now act as resistance. Instead we see that Enphase seemed to use its moving average as a springboard over the last few days. I look for the stock to move back above the $200 mark in the next month or so.

This Comeback Stock Has Growth Momentum

This Stock is in a Strong Uptrend

Upgrades and Downgrades for Wednesday, 12/8

Two Stocks to Watch for a Trade This Week