Monday was a rough day for stocks for the most part. Concerns over inflation and the rise in the number of new Covid cases were cited as the biggest culprits behind the selling as all four main indices saw significant declines.

All 10 main sectors dropped on the day and four of them tumbled more than 2.0%. The energy sector lost 3.53% and was the worst performer once again. The financial sector fell 2.8%, the materials sector dropped 2.15%, and the industrial sector lost 2.09%.

The smallest loss on the day came from the consumer staples sector at 0.30%. It was the only sector that didn’t lose at least 1.0%.

I was a little shocked when I ran the scans last night. Despite all of the selling on Monday, there were 93 bullish signals generated and 22 bearish signals.

The barometer jumped from -3.4 to +29.0 once the results were added in to the equation.

After seeing the big losses on Monday, it was difficult to make a third straight bullish suggestion, but the stocks on the bearish list had pretty solid fundamental readings. This led me to a bullish trade idea on Etsy Inc. (Nasdaq: ETSY). I have made several recommendations on the company before as it has great fundamental readings. The EPS rating is 99 and the SMR rating is an A. You can’t get better than that. 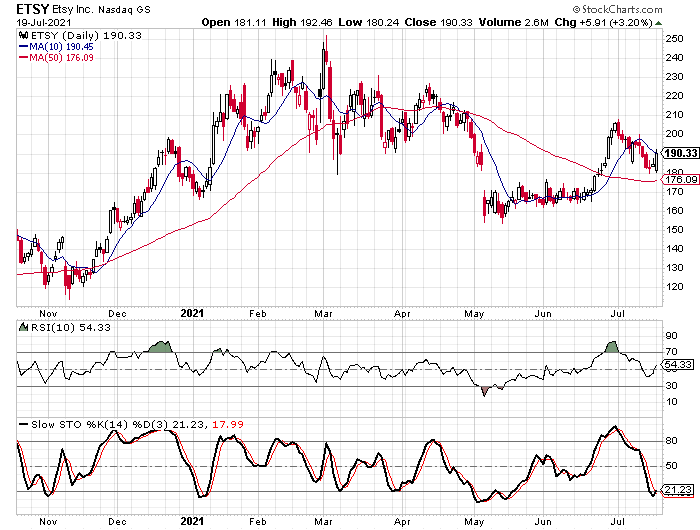 The one thing that jumped out at me the most on the chart was the bullish engulfing pattern from yesterday’s candlestick. The stock opened lower than the lowest low on Friday and then closed higher than the highest. We also see that the stochastic indicators reached oversold territory last week, but made a bullish crossover last night. I am looking for another leg higher over the coming weeks.

Upgrades and Downgrades for Tuesday, 7/27