Investors seemed to lack very much conviction on Thursday ahead of the employment report this morning. Things started slowly, but they improved in the afternoon session and three of the four indices would finish with gains. The Russell finished unchanged.

The Dow turned in the best performance with a gain of 0.93% and it was followed by the S&P which moved up 0.82%. The Nasdaq lagged those two a little, but still posted a gain of 0.37%.

All 10 sectors moved higher on the day and that is the first time we have seen that in a while. The financial sector led the way with a gain of 1.49% and the consumer staples sector jumped 1.28% for second place.

The smallest gain was posted by the healthcare sector at 0.08% and the consumer discretionary sector only gained 0.22% for the second smallest gain.

The barometer jumped to +20.2 from -14.0 and that ended a streak of six straight negative readings from the indicator.

Once again the bullish list was dominated by tech stocks and ETFs. This time 32 of the 67 signals came from the sector. With that in mind, today’s trade idea is a bullish one on the Direxion Daily Technology Bull 3x Shares (NYSE: TECL). Because it’s a fund, we don’t have traditional fundamental ratings like we do with the stocks, but the vast majority of the tech stocks on the bullish list have strong fundamental ratings. Of the tech stocks on the list, 16 have EPS ratings over 80 and A SMR ratings. 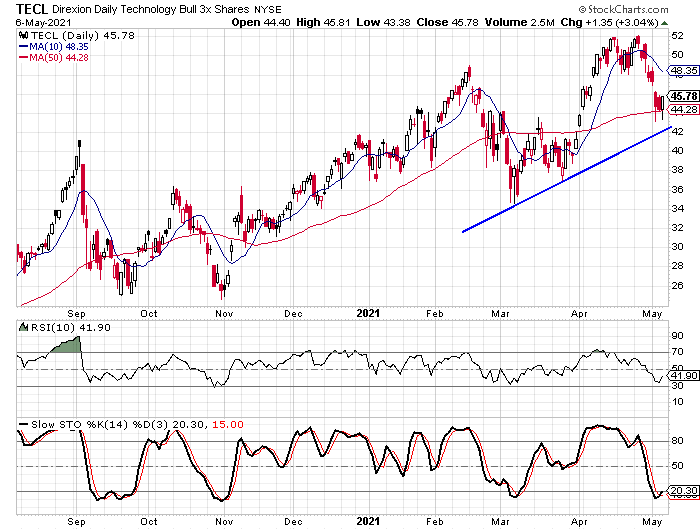 The daily chart shows how the fund has been moving higher and a trend line that connects the lows from March defines the trajectory of the trend. We also see that the fund appears to have found support at its 50-day moving average. Perhaps the biggest driver behind this trade is the bullish crossover by the stochastic indicators. The last three times the indicators have been in oversold territory and made a bullish crossover, the fund rallied over 40% each time.