Stocks retreated on Monday, but they were coming off of a number of record high closing levels for the indices. All four opened lower and all four closed lower. The S&P was the only one that managed to move in to positive territory at any point.

In a somewhat odd circumstance, seven of the 10 main sectors moved higher on Monday. The consumer discretionary sector gained 0.62% to lead the way and it was followed by the consumer staples sector with a move of 0.52%.

The energy sector took the biggest hit for a second straight day, this time it was a loss of 0.83%. The tech sector fell 0.46% and the communication services sector dropped 0.38%.

My scans were less negative again last night with 13 bullish signals and 34 bearish signals. One interesting note about the bearish list was that there were 10 bond ETFs on the list. They don’t go in to the calculation of the barometer, but I thought I would point out the trend.

The barometer moved up to -45.9 from -57.8 once we added these results in to the calculation.

Another them on the bearish list on Monday was an abundance of gold ETFs appearing. There were five funds total and a few stocks as well. In the end I felt a bearish play on the VanEck Vectors Gold Miners ETF (NYSE: GDX) gives us the best odds of success. With the GDX being an ETF we don’t have traditional fundamental ratings that I usually provide. I can tell you though that the GDX received a bearish signal from Tickeron, the AI platform that I use, on Friday. The signal shows a confidence level of 88% that the fund will move lower over the next month. 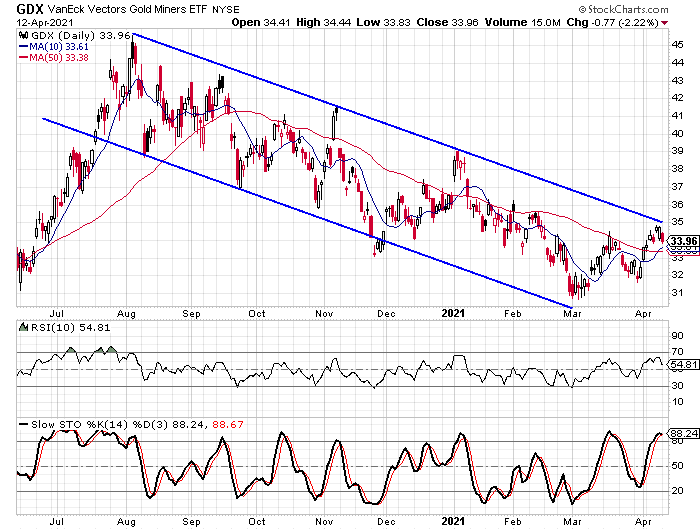 We see the downward sloped trend channel that has formed since last August. The fund moved up close to the upper rail last week before turning lower on Monday. I look for the fund to make another leg lower in the next few weeks, but I will be watching the low from late March to see if it acts as support.