We had a split opening once again on Friday as two indices opened lower and two opened higher. The Dow and S&P opened in positive territory while the Nasdaq and Russell opened in the red. By the end of the day, all four would end up in the black.

Six of the 10 main sectors moved higher on the day while four would finish in negative territory. The healthcare sector led the way with a gain of 1.13%. The industrial sector moved up by 0.96% and it was followed closely by the consumer discretionary sector which gained 0.95%.

The energy sector fell 0.56% as the worst performing sector while the other three in the red dropped less than 0.2%.

My scans continued their run of negative readings on Friday, but the difference between the two lists wasn’t as great as it had been. There were 54 bearish signals and 10 bullish signals.

The barometer dipped ever so slightly once these results were added in to the equation, falling to -57.8 from -56.5.

Even though there were 64 different stocks and ETFs to choose from between the bearish signals and the bullish signals, there were only four that really got my attention based on the chart. One was on the bullish list and the other three were on the bearish list. Ultimately I thought a bearish play on Sea Limited (NYSE: SE) made the most sense. The company’s fundamentals are pretty bad with an EPS rating of 8 and an SMR rating of a D. 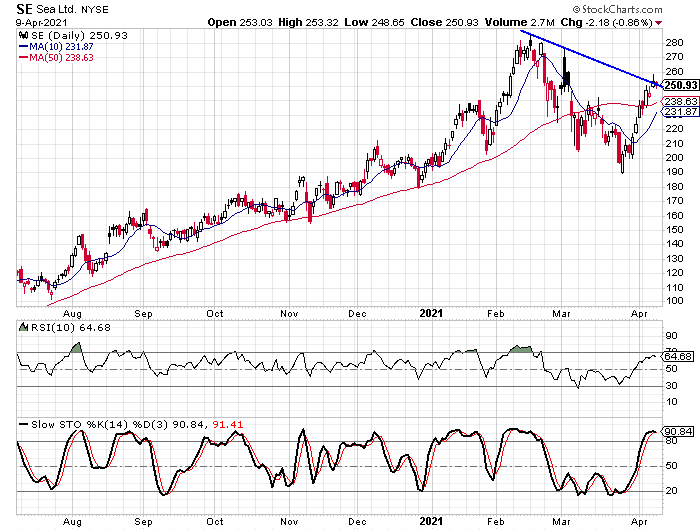 While the fundamentals are weak, it was the chart that really got my attention. We see a series of lower highs over the last couple of months and the stock is overbought. The high last week looked like it might be a break out of the downward trend, but I think it was a false breakout and look for the stock to make another move lower. The initial drop off the February high was over 22% in 10 days and the one in early March was over 25%. A drop of over 20% would take the stock down to the $207 range.