The indices opened on a mixed note on Thursday, but by the end of the day would all finish in the black with varying degrees of success. The Nasdaq led the way with a gain of 1.03% and it was followed by the Russell with a gain of 0.80%.

The S&P gained 0.42% on the day and the Dow opened in negative territory and rallied to finish with a gain of 0.17%.

On the sector front, eight gained ground, one finished unchanged, and two finished in the red. The tech sector led the way with a gain of 1.47%. It was a considerable drop to the second best performance, but it came via the consumer discretionary sector with a move of 0.38%.

The financial sector finished unchanged and the energy sector fell 1.3% as the worst performer. The utilities sector dropped 0.08% as the only other sector that lost ground.

My scans continued to go deeper in to negative territory on Thursday with 98 bearish readings and 12 bullish readings.

The barometer also continued lower with a reading of -56.5, down from -26.5 on Wednesday.

After two straight bearish trade ideas I have a bullish one for you today. Even though there were an abundance of bearish signals, there were almost as many stocks on the bullish list that caught my eye. I decided that a bullish trade on Mosaic (NYSE: MOS) would give us the greatest odds of success. The EPS rating is above average at 74 and the SMR rating is average at a C. 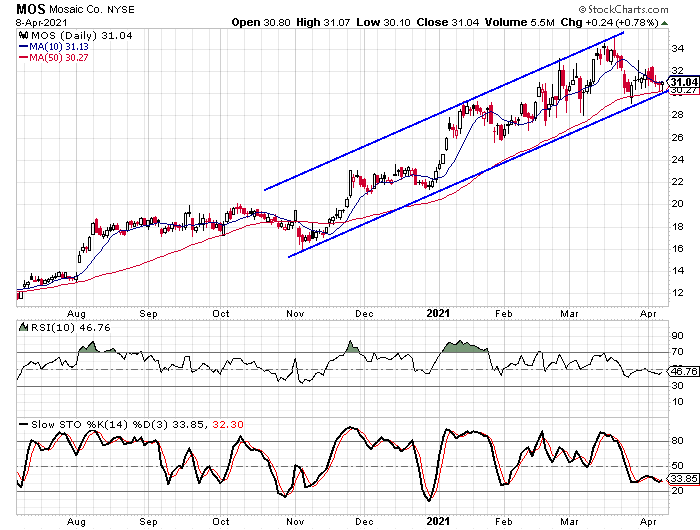 The chart is really what got my attention on Mosaic. We see that a trend channel has formed over the last six months and the stock has just hit the lower rail. We also see that the 50-day moving average is hovering in the same area as the lower rail and that gives the stock two layers of support to bounce off of.