Wednesday was somewhat of a lackluster day with minor moves from three of the four indices and a big move by the fourth. The Russell dropped 1.65% and was by far the worst performer. The Nasdaq lost 0.07% and was the only other index that lost ground.

Six of the 10 main sectors moved lower on the day while four moved higher. The materials sector dropped 1.76% and was the only sector that moved over 1% in either direction. The industrial sector fell 0.46% as the second worst performer.

The barometer dropped in to negative territory after nine straight days in positive territory. The final reading was -26.5, down from 7.2.

I have a second straight bearish trade idea for you today and it is on ChargePoint Holdings (NYSE: CHPT). The company appeared on the bearish list last night and its fundamental ratings are very poor. The EPS rating is a 9 and the SMR rating is an E. 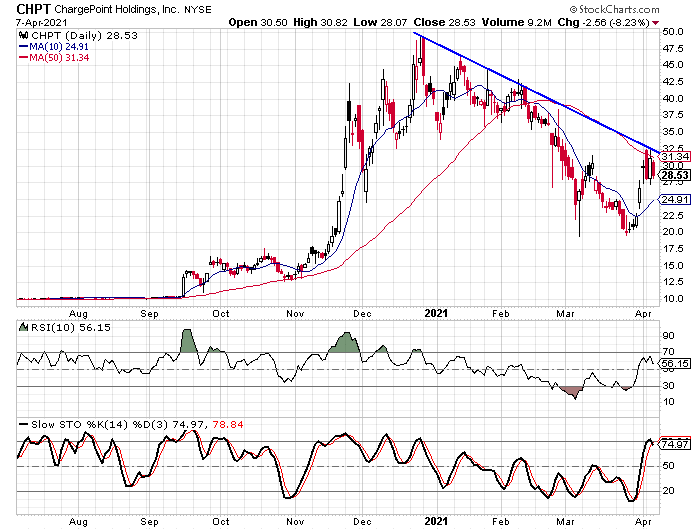 What we see on the daily chart is a downward trend line that connects the highs from the last few months and the stock just hit it in the last few days. The stochastic indicators were in overbought territory and made a bearish crossover—just as they did when the downward trend started in December.