The three-day winning streak for the S&P and Nasdaq came to a halt yesterday as all four indices saw minor losses. Three of the four were in positive for most of the day and dropped in the afternoon and moved in to negative territory as a result.

The Dow was only in positive territory for a brief period in the morning and it finished with the biggest loss at 0.29%. The Russell fell 0.25% as the second worst performer and the S&P declined 0.10%. The Nasdaq dipped in to negative territory in the closing minutes and finished with a loss of 0.05%.

We saw an even split on the sectors with five moving higher and five moving lower on Tuesday. The utilities sector gained 0.53% as the top performer and it was followed by the consumer discretionary sector which moved up 0.43%.

The tech sector fell 0.39% and that was the worst loss of the bunch, but it was followed closely by the healthcare sector with a loss of 0.38%.

My scans turned in a second straight negative result last night, but it was a small difference. There were 18 bearish signals and 16 bullish signals.

The barometer dropped in to single digits with a reading of 7.2, down from 15.4 on Monday.

Today’s trade idea is a bearish one after four straight bullish ideas. The subject company is Clarivate PLC (NYSE: CLVT) and its fundamental indicators are mixed. The EPS rating is average at 50, but the SMR rating is an A. But the chart is the main reason for the bearish posture. 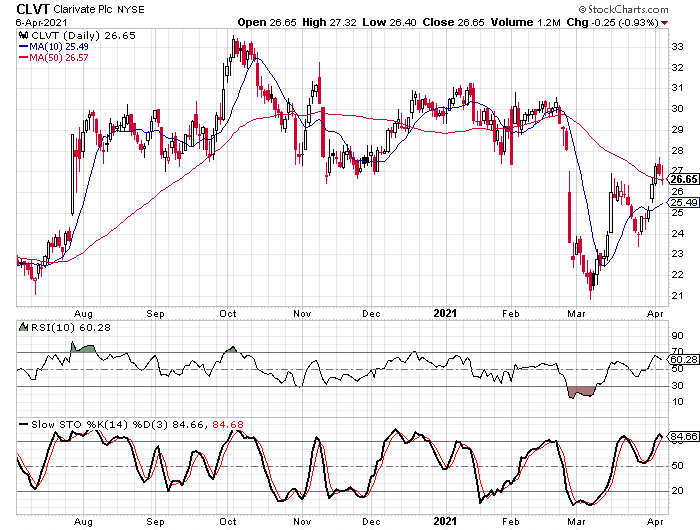 The chart for Clarivate is an interesting one. The rally off the March low came after a big gap down and in the last few days the stock filled the gap. The $27 area is a busy point on the chart too. That level acted as support last November and December and then the gap took the stock below it. The first attempt to fill the gap in mid-March came up short when the stock appeared to hit resistance in the $27 area.