Wednesday saw the indices turn in mixed performances yet again, but this time it was the opposite of Tuesday—three moved higher and one moved lower. The Dow dropped in the afternoon session and would finish with a loss of 0.26%.

The sectors were evenly split on the day with five moving higher and five moving lower. On the plus side, the tech sector was the top performer with a gain of 1.59%. The consumer discretionary sector gained 0.78% and the utilities sector rallied by 0.74%.

I got rather odd results from my scans last night with 83 bullish signals and 57 bearish signals. I don’t remember totals this high on both sides at the same time.

The barometer continued to fall with the small discrepancy between the two lists. It finished with a reading of 32.8, down from 40.9 on Tuesday.

There were a number of stocks on both lists that I considered for today’s trade idea, but in the end I picked a bullish trade on At Home Group (NYSE: HOME). The company’s fundamental ratings are strong with an EPS rating of 76 and the SMR rating is an A. 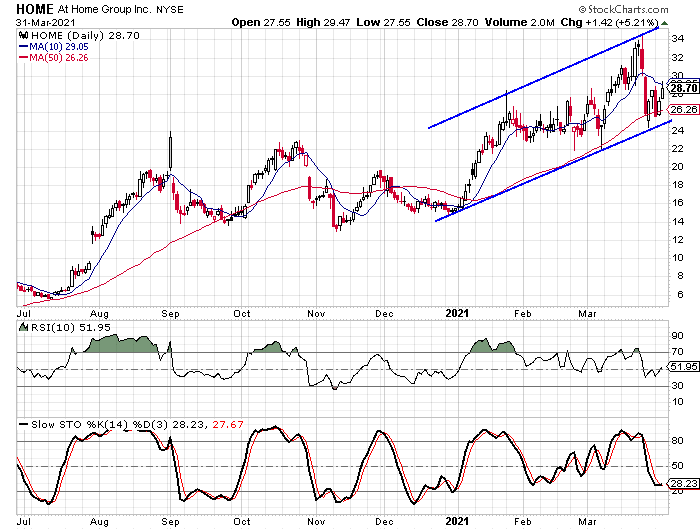 The chart shows how a trend channel has formed since the beginning of the year with the lower rail connecting the lows from January, early March and late March. The stock looks poised for another leg higher and the stochastic indicators made a bullish crossover last night.