The indices were mixed again on Tuesday with one moving higher and three moving lower. All four would open in negative territory, but the Russell moved in to positive territory shortly after the opening bell and it would finish with a gain of 1.72%.

As for the other three, only the Nasdaq spent any time in positive territory, but some last minute selling caused it to drop 0.11% on the day. The Dow fell 0.31% and the S&P lost 0.32% as the worst performer.

The sector action showed three moving higher, one unchanged, and six lost ground. The consumer discretionary sector led the way with a gain of 0.98% and it was followed by the financial sector which gained 0.70%. The industrial sector moved up 0.44% and the communication services sector was the one that was unchanged.

Consumer staples took the biggest hit and the sector fell 1.07%. The tech sector dropped 0.95% as the second worst performer. The utilities sector and healthcare sector both dropped 0.90%.

The barometer fell to 40.9 from 50.5 once last night’s results were added in to the calculation.

There were more bullish signals than bearish signals that caught my eye last night and I felt the best opportunity was on the Communication Services Select Sector SPDR (NYSE: XLC). Because it’s an ETF, we don’t have the fundamental ratings that we normally look at, but I can tell you that the fund received a bullish signal from Tickeron, the AI platform I use, last night as well. The signal showed a 90% chance of the fund moving higher over the next month. 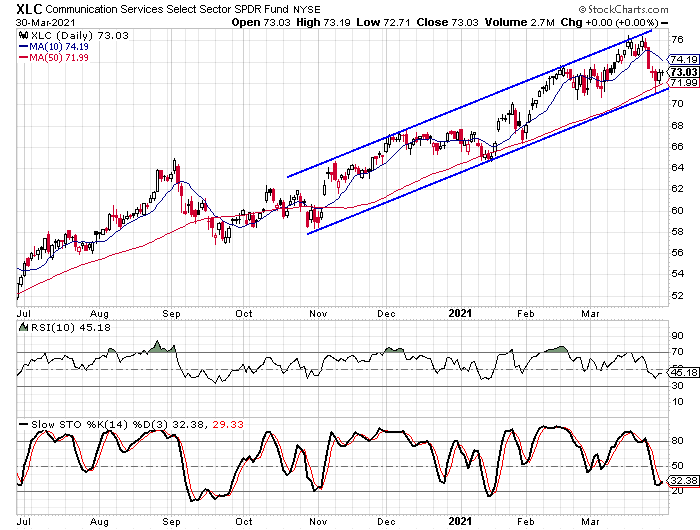