Monday finished with mixed results from the indices and that is better than investors could have hoped for after word spread that hedge fund Archegos blew up over the weekend. When the futures markets opened on Sunday night we were looking at pretty significant losses across the board. Investors seemed to calm down throughout the day and one index finished with a gain while the others finished with varying losses.

The sectors were split evenly on the day with five moving higher and five moving lower. Utilities led the way with a gain of 1.07% and the communication services sector gained 1.02% as the second best performer. The consumer staples sector moved up 1.01% to give us three sectors with gains of 1.0% or more.

On the down side, the energy sector fell 1.19% as the worst performer and it was followed by the financial sector which dropped 0.87%.

The barometer inched slightly lower once these results were added in to the equation, dropping to 50.5 from 52.6.

I mentioned Eversource Energy (NYSE: ES) in yesterday’s trade idea, but chose to use a stock from the bullish list instead. I didn’t really like any of the trade setups for either side last night, so I have a bearish trade idea on Eversource today. The company has decent fundamental ratings with an EPS of 73 and an SMR rating of a B, but the chart paints a different picture. 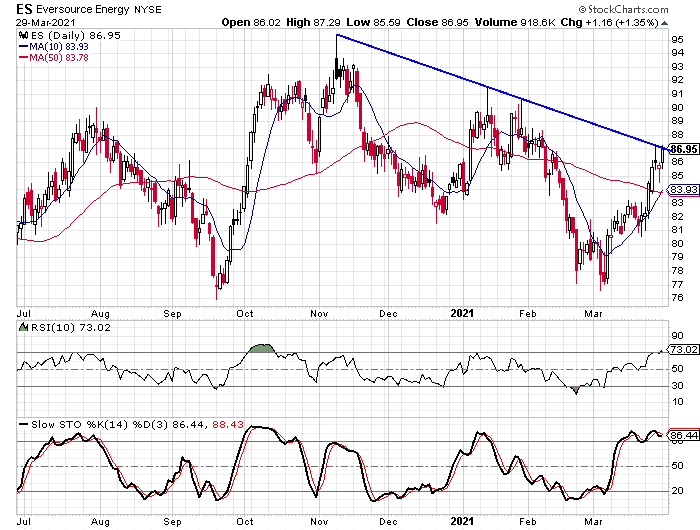