Wednesday saw the indices open mixed with three of the four opening significantly higher. The Nasdaq opened slightly higher but moved in to negative territory almost immediately and it would remain there most of the day. It finished with a loss of 2.01%.

The other three indices would be in positive territory for most of the day, but late selling hit them all and caused all of them to finish with losses. The Russell saw huge turnaround and finished with a loss of 2.35%. The S&P dropped 0.55% and the Dow dipped in to the red in the closing minutes to finish with a loss of 0.01%.

The sectors were evenly split on the day with five moving higher and five moving lower. The communication services sector was the worst performer with a drop of 2.52%. The consumer discretionary sector fell 1.48% and the tech sector lost 1.21%.

On the plus side, the energy sector gained 2.51% to lead the way and it was followed by the industrial sector which gained 0.73%. The materials sector was close behind with a gain of 0.72%.

The positive results were just enough to move the barometer in to positive territory, jumping from -15.8 to 4.1.

Because there were so many names on the bullish list from the energy sector, I decided the best course of action and the best odds of success were on an energy ETF. The Energy Select Sector SPDR (NYSE: XLE) was one of the 16 bullish signals and I liked the chart. We don’t have the usual fundamental indicators because it’s an ETF, but the XLE also get a bullish signal from AI platform Tickeron. The signal shows a 90% probability that the fund will move higher over the next month. 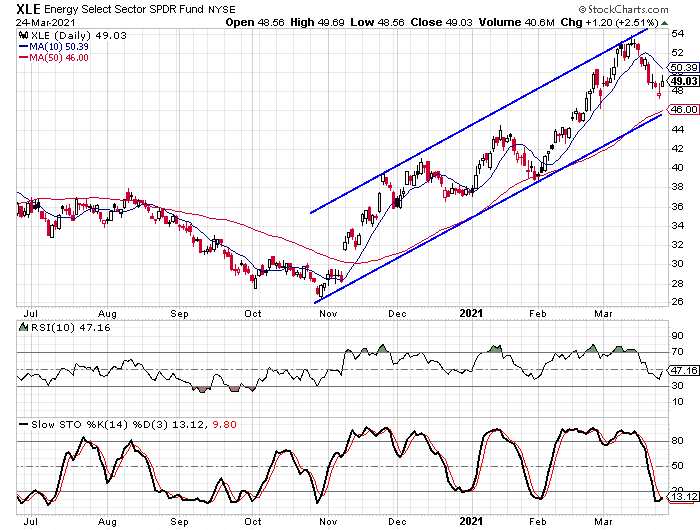 We see on the chart how the XLE has been moving higher since late October. A trend channel has formed that has helped define the various cycles within the overall upward trend. The fund came down close to the lower rail, but never quite got there. The daily stochastic indicators are in oversold territory and made a bullish crossover last night. We also see that scenario in late October and early February.