All four indices moved higher on Wednesday and that is the first time we have experienced such a day since February 8. Three of the four opened slightly lower, but turned positive in the morning session. The Russell was the lone index that was in positive territory throughout the day and it was also the top performer with a gain of 2.38%.

Eight of the 10 sectors moved higher on the day and they were led by the energy sector once again—this time with a gain of 3.54%. The industrial sector rallied 1.89% and the financial sector jumped 1.88%.

The barometer moved in to positive territory with a reading of 23.1. This is the first positive reading for the indicator since February 5.

I have yet another bullish trade idea for you today and this time the subject company is Avantor (NYSE: AVTR). The special chemical company appeared on the bullish list last night and it has good fundamental ratings. The EPS rating is a 69 and the SMR grade is an A. 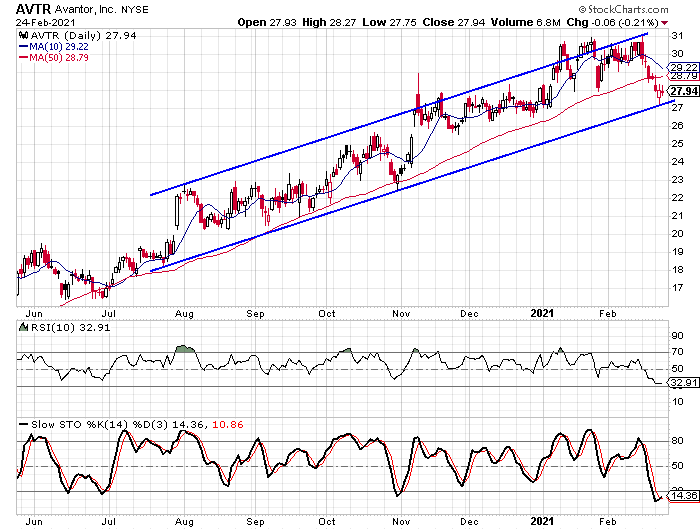 We see how Avantor has been trending higher over the last seven months with a trend channel forming that defines the various cycles within the trend. The stock just hit the lower rail of the channel and the stochastic indicators are in oversold territory. The indicators made a bullish crossover last night. The last two times we have seen this were in late June and late October. Each of these two instances preceded sharp rallies in the stock.