Tuesday started rather rough once again and all four of the main indices opened lower and headed even lower right out of the gate. Stocks started to turn around about the time Fed Chairman Powell started speaking to members of Congress. It took most of the day, but the Dow and S&P moved in to positive territory in the afternoon. The 0.0.13% gain for the S&P snapped a five-day losing streak. The Dow inched up 0.05%.

The Nasdaq (-0.50%) never did make it in to positive territory, but it closed well off its lows. The Russell suffered the worst result with a drop of 0.88%.

The sectors experienced their best day in a while with seven of the 10 moving higher. Energy stocks led the way again with the sector moving up 1.65%. The utilities sector gained 0.83% and the communication services sector tacked on 0.78%.

As for the sectors that moved lower, the consumer discretionary sector fell 0.66% as the worst performer and it was followed by the tech sector which lost 0.28%. The healthcare sector dropped 0.17% as the third one to lose ground.

My scans snapped their 12-day streak of negative readings with 49 bullish signals and 19 bearish signals.

The barometer jumped sharply with the positive result, climbing to -1.3 from -28.4.

With the greater number of bullish signals last night, I have a third straight bullish trade idea for you today. Qualcomm (Nasdaq: QCOM) is a stock I have been stalking, looking for a better entry price. The company appeared on the bullish last night and it has great fundamental ratings. The EPS rating is 81 and the SMR rating is an A. 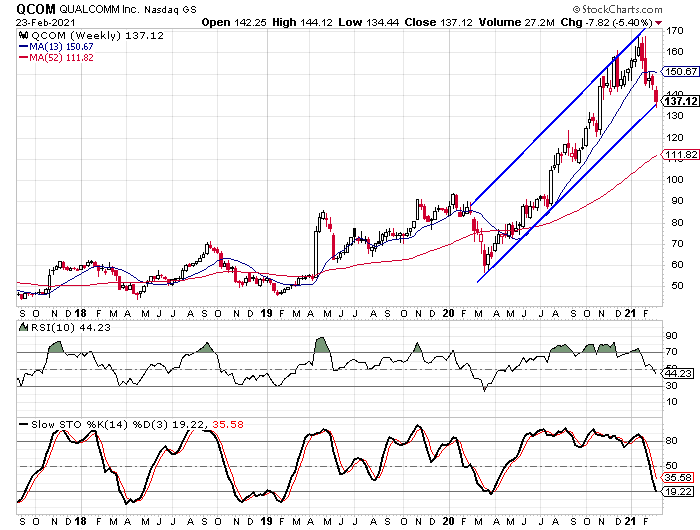 The weekly chart shows a better depiction of why I have been watching the stock. Qualcomm has been trending higher within a trend channel that goes back to last year. The dip over the last five weeks dropped the stock down to its lower rail and the weekly stochastic indicators are reaching oversold territory for the first time in almost a year.